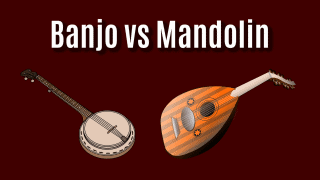 There are SO many stringed instruments out there, many new musicians aren’t certain of the differences between them. The guitar is so well known and popular most people can pick them out, but some of the others, not so much. The banjo, the mandolin, and even ukuleles are often confused. This article focuses on the banjo vs mandolin, the differences, similarities, and which you should choose!

Once you know the differences, the two instruments will be easy to tell apart, so lets get right into it!

What Is the Mandolin?

Both the Banjo and the mandolin are the type of instruments that are stringed. The mandolin is also a part of the lute family. Players typically use plectrums, better known as pics, to pluck them. This compact instrument came to be in Germany and Italy back in the 1700s but its origins lie in the mandora of the 1500s.

Pasquale Vinaccia, a luther from Naples, Italy, reportedly had the most significant impact on the contemporary size and shape of the mandolin. Italian musicians started showing up all over Europe in the late 1700s and early 1800s with this new, compact, 8 string instrument.

As we said, the mandolin is equipped with four separate pairs of strings, 8 total, that are made out of steel. Like most steel string instruments machine heads are necessary to tune these strings, too. The strings run over a fretted fingerboard, similar in construction that that on an acoustic guitar. The standard mandolin has 14 frets. The mandolin is normally tuned in the same arrangement as a violin.

Possibly the most distinctive feature of the Mandolin is that they have bodies that are reminiscent of pears in shape. The shape of the back of the Mandolin varies in three general styles, the bowlback, archtop, and flatback.

Like most stringed instruments, there are tons of variations on the mandolin. This include different types of bowlback mandolins, 10 and 12 string variations, and hybrid instruments like the banjolin!

What Is a Banjo?

The banjo, in short, is another musical instrument that’s stringed. It has a lengthy neck. It has a body that is circular with a back that can be left open or attached to a wooden resonator. The body looks similar to a drum. The material that covers the ‘pot’ is a leather or parchment that is expanded on top of a hoop that’s made out of metal. It’s similar to a tambourine in that way.

Just like the mandolin and guitar, people often use plectrums to play banjos although fingerpicking is also a very common playing style.

Like the mandolin, it’s equipped with a neck that’s fretted. You can find the banjo in a wide variety of string arrangements, anywhere from 4 to 12! Although the resemblance really isn’t there, it technically is a part of the guitar family.

The construction and parts of a banjo can be quite complicated, and it is definitely one of the more unique stringed instruments.

Banjos are favorites in folk music in the United States. People often think that the contemporary version of the instrument has roots that can be traced all the way back to the Caribbean region. These origins may go back to the 1600s, too.

Banjo vs Mandolin: Difference Between the Banjo and Mandolin

What’s the difference between the banjo vs mandolin? Although the mandolin and the banjo undeniably have things in common, they’re not the same at all. There are marked differences between the two instruments.

If you read closely above, you’ve probably already guessed some of the differences, but in this section we go into greater detail into each!

The banjo has a signature twangy sound to its credit. The mandolin, however, is a whole other ballgame. This instrument has a sound that’s redolent of a guitar with twelve strings total, albeit with a pitch that’s markedly higher. The string number differences explain the sound differences.

The majority of banjos that are accessible in this day and age have between four and six strings. Mandolins typically have eight of them, although 10 and 12 string options exist. The strings on a mandolin are also paired together, where a banjo has individual strings.

The most common type of banjo is that of the 5-string variety, which has a drone string that runs to the 5th fret. All of the mandolin’s strings run the length of the instrument.

Mandolins and banjos often are seen in different musical applications. Mandolins are often staples in classical music from Europe. They’re sometimes used in bluegrass and folk music in the United States as well. It in many cases depends on the mandolin type.

Banjos are beloved in folk, bluegrass and even Dixieland jazz music. It isn’t out of the question to hear banjos in rock and pop tunes, either.

Often, the two instruments will compliment each other, rather than competing for a spot on stage.

Basic banjos have necks that are remarkably lengthy. This makes sense, too, That’s because they’re a lot like guitars in the length department. As we mentioned earlier, standard mandolins tend to be 14 frets and shorter than even most ukuleles.

If you want to comprehend the differences that exist between mandolins and banjos, it can help you considerably to zero in on the appearances of their bodies. Mandolins have bodies that consist of wood. They’re empty inside. Their bodies in many situations have a couple of openings that are reminiscent of the letter F in form. They’re carved into the physiques of the instruments. What is the point of these holes? The holes enable sound to get out via the anterior of the instrument. Contemporary mandolins in many cases have triangular pick guards that are made out of plastic. They’re under the strings and exist to safeguard the wood from scrapes and damage in general.

Banjo bodies are nothing like those of the mandolins. They’re usually manufactured using wood rings. They tend to have interior tone rings, too. They often have plastic slabs that look like drum heads. They in some situations feature resonators that are reminiscent of bowls in form as well.

Banjos have bodies that are a lot like circles. Mandolins have ones that are redolent of teardrops. That’s the reason that differentiating between them from a distance usually isn’t too difficult or time-consuming.

Is the Banjo or Mandolin Easier to Learn

Either way, the learning curve can be lessened by getting yourself started off on the right foot with a good instrument and a good teacher!

Banjo vs Mandolin: Which Instrument Should You Select?

Now that you know the difference between the two instruments it’s time to pick yours! Even knowing what you know, it can be hard to tell anyone which instrument is a better fit for them because it’s all a matter of personal preference and aspirations.

They’re similar cost-wise, so that is not normally an issue. People who are keen on sounds that are a bit higher may gravitate to mandolins. Fans of deeper and “earthier” sounds may be drawn into the universe of banjos.

If you are interested in picking up a Banjo, check out our recommended courses to help you learn to play banjo!

Another big distinguishing factor is the specific music styles that you appreciate. If you’re a fan of bluegrass and folk strictly, then it may be in your best interests to go for a banjo. Each instrument is far from “mainstream”, so you may want to figure out who and what bands you’ll fit into if you pick the banjo vs mandolin.

You could always just opt for the hybrid instrument, the Banjolin! Just like the banjolele and banjitar, the banjolin is a unique and fun instrument that combines some of the best features of both the banjo and the mandolin!

The differences between banjo vs mandolin are actually quite staggering once you know what they are, and after reading this article there should be no doubt in your mind!