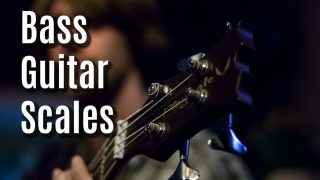 Just like when playing the six string guitar, learning bass guitar scales take time and attention to detail. However, it doesn’t have to be difficult. It just takes a little practice and some patience.

So here are the five basic and easy bass guitar scales every beginner should learn and practice before moving on to more advanced variations.

What is a Guitar Scale?

The guitar scale is a set of notes played from the root note to the 7th-note. It generally consists of eight notes and it contains a variation for every degree. When you really dive into the weeds, there are countless scales for you to learn.

Bass guitar scales are similar, but they only contain five notes and they can be played within the chromatic scale. This makes them easier to learn than a typical guitar scale because you have more time opportunities in between and start everything at the bottom or top note.

The benefit of learning bass guitar scales is that you will start to see patterns along the neck of the bass and you’ll be able to use them to improvise and play solos as you get better. You’ll also start to hear them and pick them out in many of your favorite songs, adding a depth to the music that wasn’t always there!

The major scale, just like all scales, follows a formula that you can follow when you are playing so that you’ll be able to replicate it, regardless of the key of the song.

The formula for the major scale is as follows:

The second scale we will look at is called the minor scale. It is another common scale and often finds it’s way into jazz music, although more than a few rock songs have been soloed with it as well.

As opposed to the major scale, the minor scale is a more natural sounding scale. The difference between it and the major is that in a minor scale, there are often sharps or flats. For example, if we were to play a C minor scale on our bass, it would contain the following notes: C, D, Eb, F , G , Ab, Bb , C.

The formula for the Minor Scale is:

As you’re learning the all the scales, including the minor scale, start by finding your finger placements and slowly play the notes. Only build speed when you can play the scale without mistakes!

This makes the major pentatonic scale easier to learn and play over chords or improvise with because you have more time between notes.

If you’ve already learned the major scale, you just need to eliminate the 4th and 7th notes. For our example above, a song in the key of C would contain the notes C, D, E, G, A, C. The F and B notes are skipped.

Looking at the minor scale, when you those two notes you are left with a song in C having the notes: C, Eb, F, G, Bb, and C.

We find the minor pentatonic scale easier to understand once you start learning musical theory. If this is something you haven’t done yet it might be a good idea to start now!

Our final scale is one of our favorites to play. This formula is a mix of the pentatonic major and minor scales.

The variation you’ll find here is that you add a augmented 4th or a diminished 5th note to the minor pentatonic scale. This note, known as ‘the blue note”, is a chromatic note that gives the soulful tone and feel to this scale.

The formula for the Blues scale is as follows:

Once again, going back to our song with a root note of C, a blues scale would be C, Eb, F, F#/Gb, G, Bb, and C.
The chromatic note is out of key, but it gives that blues sound. For now, that is fine. You can dig more into why this works when you study music theory.

This article was written to provide you with guidance for learning scales. As a beginner, it is best to start with the easiest scales like the major pentatonic scale and not get overwhelmed. There are tons of scales out there for you to learn as you become a more skilled bassist!

Once you have mastered the five basic scales and can play them over chords, try improvising on them. Make sure to practice slowly as you are not expected to be able to play these immediately. Speed will come when the quality and memorization kicks in!