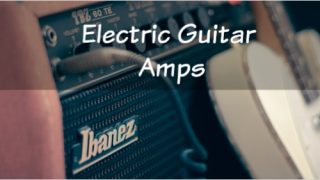 When it comes to creating the right sound with the electric guitar, selecting the right amplifier is of utmost importance. A great amplifier not only helps your notes ring loud and true but also helps to complement your style of music.

Players of different genres usually tend to prefer different types of amps according to what works for their music. For example, a rock or metal guitarist would be looking for a lot more raw power than the jazz musician.

Also, the location at which you will be playing will also play an important role in your selection of amp. What works in an indoor studio will probably not suffice for a live performance and vice versa. Thus, it is important for a player to assess their particular music requirements before they can select the best amp suited for their needs.

That being said, great electric guitar amps share some traits that we shall be exploring in this article. It is important to be familiar with standard amp terminology and so we will go into a brief overview of the different types of electric guitar amps available in the market today.

Amplifiers available in the market today can be subdivided into four broad categories, Solid State (analog), Tube, Modelling (digital) and Hybrid amps. Each of the amps has unique traits that are suited for specific genres. For examples, a metal guitarist will undoubtedly prefer a tube amplifier.

Solid state amps are compact lightweight amplifiers that use transistor technology in the power and pre-amplification sections. Thus, they are easy to maintain and are sturdy and reliable.

Solid state amps generally produce clean tones although the low-end models will be prone to distortions. They are preferred by beginners and musicians looking for a sturdy companion on a tour. Although the debate between solid state and tube technology is zealously played out among musicians, both work well with different sounds and requirements.

As the name suggests, tube amps use the technology of vacuum tubes. A tube amp produces a louder sound than a solid-state counterpart with the same wattage and is thus preferred by many musicians who are looking for an organic distortion in their notes. However, tube amps deteriorate with time and the tubes need frequent replacement. Due to this, tube amplifiers tend to be more expensive and high-maintenance than solid-state amps.

Modelling amps try to hit the middle ground when it comes to the heated tube vs solid-state debate. These use digital processing to simulate the sound effect achieved by old fashioned tubes and the sound of numerous amps can be achieved through one amp itself. The programmable nature of modelling amps and their wide versatility have contributed greatly towards their increased popularity among musicians.

Hybrid amps also attempt to borrow the best from both solid-state and tube technologies. Solid state transistors are usually used in the power section of the amp and the tubes make up the pre-amplification circuitry. Tube like sound is thus achieved without compromising on the amp’s reliability.

What makes the Best Electric Guitar Amps for Beginners?

As we have discussed above, a large number of options are available when it comes to amps. There are variations in size, wattage, technology as well as cost. It is thus advisable to try out a few amps and figure out what works best with your guitar.

With such a large number of available choices, the process of finding the perfect amp undoubtedly becomes daunting. In order to help you along this process, we have a few pointers regarding four features that the best electric guitar amps will all possess.

Flexibility in its Configuration

Many amplifiers are available in self-contained units called combos that combine both the amplification and power cabinets into a single box. While such a combo usually meets the requirements of a beginner, seasoned players often tend to choose separate head and speaker units.

The best thing about this flexibility in configuration is the fact that nearly any amp head can be combined with any speaker cabinet to generate a variety of tonal requirements. Moreover, combining two heads and a speaker cabinet into a stack is also possible and such an arrangement builds up a lot of raw power.

The configuration flexibility also makes the amps more portable as two separate units. This is a godsend for people on tours who have to tug their heavy gears around.

The construction of an amp not only influences its longevity but more importantly, its quality of sound. As an amp is tugged around from one gig to another, it will definitely get banged up a little. Thus, a sturdy build is the order of the day for any traveling musician. It is also a good idea to use corner guards to help protect the instrument against damage.

The thickness of the wood used in the cabinet construction is a major factor in determining the sound quality of an electric guitar amp. If the wood is too thin, the cabinet walls might loosen up through vibrations. If the walls are too thick, the sounds might get muffled. Half inch is an ideal thickness for a sturdy yet crisp sounding amp. Amps also come both in open-back and closed-back categories, although the closed back ones create a better bass sound.

Great amps will help you in smoothening out your sound. This can be achieved through a clever use of spring reverbs (which add natural sounding tones to the fray) and effects loops (that help in eliminating the amplification of noises introduced into the loop).

We found a great video detailing the use of effects loops you can see below:

The best electric guitar amps will allow you to switch channels from clean tones to distorted ones. Usually, a footswitch would be included to facilitate a swift changeover of channels. However, with modelling amps, you may need to separately purchase a footswitch that allows control over pre-amp channels even from remote locations.

How do you know that you’ve Chosen the Correct Amp?

The best way to choose an amp is to play your guitar with the amp plugged in and really use your ears to distinguish which model works with your instrument the best. If you are a beginner and would like to choose a model that you want to grow with, the decision might get a little trickier. Here is a brief tutorial that will help you learn more about the factors that you must assess before choosing an amp to go with your style.

The world of electric guitar amps is a large and complicated one. With this guide you’ll have a great head start into a well rounded knowledge of them, but no where near a complete one. From here we recommend you look into some of our specific reviews of amps and compare specs from different models. Also, pay attention to the differences between amps that are designed for different styles of music.