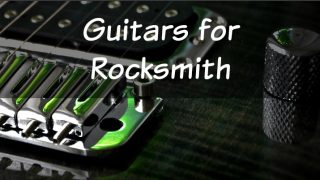 I’m not going to recommend you go out to a pawn shop and get a super cheap electric guitar to plug into the Rocksmith game. In fact, I don’t recommend a new guitarist ever pick up a bottom-of-the-line guitar to learn on. They don’t need to spend thousands on an instrument either! The best guitar for Rocksmith is often the same thing as the best beginner guitar.

We have built our guide with a mindset of price and value. We picked out guitars that would make the game fun, while also lasting long after you stop playing that game and get to jamming with friends or around campfires.

Don’t get me wrong, a cheap guitar will work, but it’s not the best guitar for Rocksmith. The best one is something that will sound just as good plugged into an amplifier as it will into your Xbox or PlayStation.

Rocksmith does have some really good filtering technology so a guitar with really poor outputs, pickups, and hardware will probably sound fine while playing the game. But for most, playing the game is a means to playing in real life.

We also realize that if you’re playing Rocksmith, or buying a guitar for someone who is learning on Rocksmith, then you are a fairly new guitarist and don’t need to spend thousands on a limited edition, top of the line, ear-splitting guitar.

Before we go any further though, let’s make sure you know the basics of what you are buying this guitar for!

We realize that if “Rocksmith Guitar” is something that you’ve been given on a Christmas or Birthday present list then you may not even know what it is!

Rocksmith is one of the premium options for learning the guitar via software that adapts to a player’s skill level. It is available for all major gaming systems, including Xbox, Playstation, PC, and Mac. While Stairway to Heaven is banned in Guitar stores, it isn’t banned in your own home on Rocksmith!

The game itself comes packed with lessons and songs that are designed to get you playing early and often. It also adjusts to your skill level, so you will always be pushed just enough to keep you improving, without making a lesson or song impossible and frustrating to play.

In the table near the top of this post, we presented our choices for the top guitars for Rocksmith. In the section below we’ve given you a more detailed review of each instrument.

Each one includes a link over to Amazon so you can read customer reviews, see the manufacturer’s detailed reports, and see the price.

One thing we should note before we go any further. You can use an acoustic guitar with the Rocksmith software. Instead of plugging the software directly into your guitar with a cable you’ll need to plug a microphone into your system.

We don’t like this as much because you can pick a lot of ambient noises or static that will throw off the quality of your experience. Now, that being said, if your heart is set on playing Acoustic check out our recommendations for beginners.

If you have an Acoustic already you can give it a try, but just know that this can lead to problems and you may want to pick up an Electric or Acoustic-Electric while you are learning with the game.

This guitar incorporates many of the features you’d expect from a Les Paul guitar while not coming with the price tag.

The guitar comes with a mahogany body and neck, maple top, and rosewood fretboard. The body is cut slightly slimmer than the original, making it lighter and a little easier to handle for beginners. The tone is a result of two Alnico V Humbucker pickups with tone and volume dials for both.

You can find this guitar by itself, but the listing we have below is for a player pack, perfect for a Rocksmith player soon to be stage musician and globe-trotting superstar! 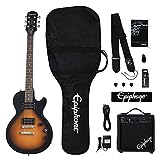 The smaller size of this guitar makes this instrument easier for beginners to fret and move around the neck, without sacrificing the unmistakable style of a true Ibanez. This is especially nice for beginners that may struggle to play a full-sized instrument.

The body is made from poplar and the neck is fully maple, a nice feature you rarely see on a guitar at this price. The rest of the electronics and set up match what you would find on the GRX and GRG models, which makes this a steal at this price point!

This guitar may be slightly smaller than most but it’s no toy, it produces HUGE sound. 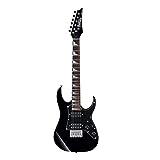 Don’t let the Squier name fool you, this guitar brings exceptional value and the traditional Stratocaster sound to an instrument good for beginners and intermediate players alike. This guitar is an absolute steal, especially since it’s the 2nd least expensive on the list.

The three single-coil pickups are aligned on the body of the guitar for the traditional strat setup. While the body is made from an Alder top and back with a laminated body in between. The maple neck and rosewood fingerboard are a nice upgrade to the normal mahogany you find on instruments normally.

In true Stratocaster style, it also comes with a tremolo system. We recommend leaving it off at first, then as you get more comfortable playing adding it back in.

Hundreds of metal, rock, and hard rock guitarists have played the Les Paul as their go-to axe when they truly want to shred. The Les Paul Special VE is a tribute to that legendary instrument, at a price point that is much more affordable!

The Alnico Classic Pro humbuckers on this guitar give it a massive dynamic range and great tonal capabilities. The volume controls are push/pull, letting you switch between a full humbucker and a traditional Les Paul sound when the control is at its opposite end.

The best part of this instrument for newer players is the bolt-on mahogany neck that has been specially shaped in the 1960’s Slim Taper D profile. This slimmer profile helps guitarists reach hard to finger chords and shred like their idols!

Now that you have our recommendations, we’d like to talk a little about the factors we considered when choosing them:

Important Features for a Rocksmith Guitar

The first thing that we look for was something we’ve already mentioned. For Rocksmith, we prefer electric guitars. Sure, acoustic will work but we think it adds a factor of error for the feedback the game gives you and thus isn’t ideal.

The next is quality. Rocksmith has some pretty nice internal filters built into the software that will eliminate a lot of buzz that can result in poor guitar construction, low-quality electronics, and other problems common on inexpensive instruments.

This makes a cheap guitar sound like an alright option right? Well, the problem comes when you try to play without the software. All the design flaws come to light and you end up having to buy yourself a new guitar to rock with friends or without the game. Why subject yourself (or the person you’re buying it for) to that?

By spending a little more money you’ll find a decent guitar that will last until you WANT to upgrade, not force you to spend more money when you’re not ready.

Just by following these two guidelines, we think you’ll enjoy the game more, learn faster, and keep playing long after you’ve outgrown the game itself.

The last thing you should think about is getting a backup cable while you are buying the instrument.

The Rocksmith game should come with a cable if you buy it new, but if you get it used, as a loaner from a friend, or from an online retailer you might not have the cable included.

We recommend having a 2nd cable anyway, you never know what will happen to one. You can price them and see reviews here:

When all is said and done we think that the Epiphone Les Paul Guitar Player Pack is the best guitar for Rocksmith. It has a great combination of quality, size, sound, and price for someone learning with the Rocksmith game!

Have you learned to use an instrument other than what we’ve listed here? We’d love to hear your opinions! Comment below and we’ll check out your recommendations!