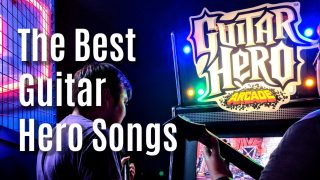 It’s funny how certain songs will always remind you of special events, people, or times in your life. To reminisce on one of our favorite video games of the last 20 years, we decided to make a list of the 25 best guitar hero songs.

It’s easy to say best, but maybe these are just our favorites. Either way, they are songs that will always remind us of the game!

If you played some or all of the Guitar Hero games this will be like taking a stroll down memory lane, for those who just love music you’ll get an idea for the types of music that was included in these games!

What is Guitar Hero?

Guitar Hero took the video gaming world by storm in 2005. Armed with a guitar shaped controller, you were able to play songs along with your favorite musicians and take over playing lead, bass or rhythm guitar for a variety of rock songs. A guitar neck scrolled past you and you had to hit one of five buttons, which coordinated with strings on the guitar.

The game tried to simulate the feel of playing real guitar, with a crowd that cheered and boo’d along with how accurate you were. In addition to scoring points for hitting the correct notes, the harder songs incorporated things like hammer-ons, pull-offs and a whammy bar.

All and all, this game was extremely fun and we played for countless hours. It is the closest thing to playing guitar that wasn’t actually playing guitar and a great way to spend time with friends and have fun. Especially with those friends who don’t play an instrument (yes, we have a few friends like that!)

So, what were the best guitar hero songs? Let’s find out…

25 of the Best Guitar Hero Songs

We have no doubt that we will leave off many songs that people feel should be on this list, and you could probably poll 100 different people and get 100 different “top 25’s”. That’s ok, it was still fun looking back at the Guitar Hero games and assembling this list! Disagree? We’d love to see your lists!

Although not a very complicated song to play, Surrender is easily among the top played songs among Guitar Hero gamers. A classic rock song aside from Guitar Hero, the repeatable chords and fun lyrics bump this song into the top 25.

Kurt Cobain and company make the top 25 with their emotional Heart-Shaped Box track. Another song that allows the gamer to lose themselves in the lyrics and mild chords. Star power is imminent during the short, yet powerful solo.

Shout At The Devil – Motley Crue

A track from Guitar Hero II and a rock & roll classic. Shout At The Devil is the ultimate song to feel like you are on stage in front of a sell-out crowd. Guitar Hero just let you do it from the comfort of your living room!

A 90’s punk rock classic that is sure to make any gamer feel rebellious. This song will have you hitting every chord while shouting the lyrics at the top of your lungs. The late solo is short, yet tantalizing.

You Really Got Me – Van Halen

Yes, another rock classic, but it couldn’t be left off the best guitar hero songs list. The solo halfway through the song will melt faces and leave your fingers numb from attempting to hit all the chords required for perfection. This track will really get you.

Carry On My Wayward Son – Kansas

This song reminds us of so many things, and Guitar Hero is among them! A powerful solo right out of the gate captivates gamers. Even though the verse and chorus prove to be easy, it’s waiting for the second solo that makes this song worth playing and of course the accolade of one of the best guitar hero tracks.

Message In A Bottle – Police

Most every 2000’s kid came to know this song because of guitar hero. Fast-paced, fun, and easy to sing along to, Message in a bottle easily makes the best guitar hero tracks list. No need for an SOS.

This alt-rock headbanger will have gamers wanting more of the Foo Fighters. More of the band’s songs show up in later editions of guitar hero that satisfies that craving, but Monkey Wrench was first and the best. An anthem of sorts, Monkey Wrench is exactly the song that will inspire you to keep shredding the guitar while learning every single word to the song.

Can’t You Hear Me Knockin’ – The Rolling Stones

Is any best guitar hero tracks list complete without the Stones? We think not! One of their all-time classics takes form in Guitar Hero II. It’s slower pace really gives permission to the gamer to get more emotionally invested in the song. Find your rhythm and get that star power meter loaded for the face-melting solo.

Probably the most popular song on Guitar Hero as far as lyrics and playability. This classic rock song settles in as an encore song, perfectly rounding out the setlist. This song comes about halfway through your rock and roll journey and reminds you of why you starting playing this game in the first place.

Killing In The Name – Rage Against the Machine

Often referred to as “nu-metal”, Rage Against the Machine’s music brings the emotions just as their name promises. Rage takes us back to the days of High School and the angry angst this song helped us to express.

In the game this particular song will cause gamers to lose themselves in the vocals and complicated string of chords that accompany the solo.

Carry Me Home – The Living End

Better stretch your fingers for this one because right out of the gate, you’ll be expected to hit a lethal repetition of chords. This song makes the best guitar hero tracks list not because of its popularity or playability, but because it’s incredibly challenging to gamers. If you can master this song, you can master them all.

Some people will hate us for this on for sure, but in our opinion it’s not at the top 25 of guitar hero songs without giving a nod to Free Bird. The world-renowned solo and face-melting chords give way for gamers to feel as if they are on the stage themselves. It’s only fitting that Free Bird rounds out the setlist on Guitar Hero II.

“Ooooooh, Barracuda!” One of the most well known female bands during the ’70s, Heart delivers with the classic rock hit. A chart-topper on the radio and in Guitar Hero. This song is relatively easy for gamers to execute perfection, but it’s the ability to sing along and play that really seals the deal for making this top 25 list.

The Seeker – The Who

Another well-known rock and roll band of the ’70s, The Who is a band that is a “must-play” band among Guitar Hero gamers. A relatively laid back song teases the player like this is song is going to be a breeze. However, this proves to be wrong as the pattern of chords is fast and complicated.

Guitar Hero III Legends of Rock hits us with the all anticipated Red Hot Chili Peppers track, Suck My Kiss. This alternative rock song is relatively easy to play until the solo which requires fast strokes and even more focus. One of our personal favorite bands and songs!

Heavy metal isn’t heavy metal without Metallica. Don’t let the slow intro fool you; this song is one of the hardest to master and complete as the notes per second hit all-time highs. Metallica brings the heat with metal shredding solos. Get ready to rock like you never have before.

Easily the most well-known hit of band Motorhead and a concert set-list guarantee. Ace of spades is one of three songs that appears in multiple games.

Is there anyone on the face of the planet who doesn’t know this song?? Guitar Hero gives you a chance to jam with Freddie Mercury and company; what more could you ask for? Get your vocals and fingers ready to play one of the most popular rock songs of all time.

Through The Fire and Flames – DragonForce

Many consider this song to be the most challenging song in Guitar Hero history. This is an obvious best guitar hero track for no other reason than that!

If the hardest is on here, might as well add this one as well! Players consider this the second hardest song to Through The Fire And Flames because of its descending riffs and fast strokes. Thrash metal lives up to its name, bringing all the thrashing runs.

Beast and the Harlot – Avenged Sevenfold

A crowd favorite among Guitar Hero songs and a relatively easy song if you can get through the fast strokes.

Devil Went Down To Georgia – The Charlie Daniels Band

While most people know this as a fiddle song, Guitar Hero made it one of the most challenging and fun tracks in its lineup. This 5-minute song contains some of the most grueling and difficult solos of the entire game. In fact, one of the solos is titled the “Death Drain Solo”. Say your prayers…

Guitar Hero had fun and games with triple notes will haunt you throughout this song, but as always, this classic rock favorite is necessary for Guitar Hero gamers.

Bulls on Parade – Rage Against the Machine

Last but not least, Bulls on Parade is at the top of many gamers Guitar Hero setlist. Not extremely difficult in nature, this song once again has gamers feeling like they are on stage in front of a crowd of thousands.

As of 2021 Guitar Hero is discontinued and its parent company, Ubisoft, has no plans to revive the series. Guitar Hero did have a hiatus from 2011 to 2015 as well, before Guitar Hero Live was released with a new, six button controller, and made for the new gaming consoles. This game had an online version, called GHTV, which was active until 2018.

Ubisoft acquired FreeStyleGames from Activision in 2017, which fueled speculation and hope the game would see a 2nd comeback, but as of now there has been no public signs of this actually happening.

On a personal level, we hope so. Guitar hero did a ton for getting people interested in learning guitar and even started to give them the basic feel and finger agility needed to play!

What Songs Are On The First Guitar Hero?

What Songs Are On Guitar Hero 2?

How Many Guitar Hero Games Are There?

Is Guitar Hero Coming Back

Right now, Activision is the company that owns the rights to the Guitar Hero franchise and they have made no announcements regarding reviving the currently dead franchise. When asked about it, the company stated they were focusing efforts online instead.

We know not everyone will agree with our best guitar hero songs, and that is ok. One of the best parts of music is we can all disagree and still love it just the same. We hope you enjoyed reading through our list just as much as we enjoyed making it!