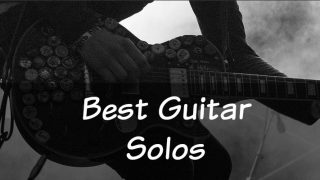 We all know a few epic guitar solos. They stick with you… you find yourself humming them or tapping a pencil to them without even noticing, they get stuck in your head for days, and more often then not they inspire some embarrassing air guitar extravagance.

Guitar solos are one of the reasons the guitar is so popular. When they are done right they ingrain themselves into the culture of that time. Ask anyone who was around in the early 70’s when Jimmy Page introduced us all to the “Stairway to Heaven”.

Fast forward 20 years to “One” by Metallica. Yup, it’s stuck in your head now. We know your pain.

Now, ranking 50 amazing pieces of music is just plain difficult. Especially ones that are this amazing to begin with. So we didn’t! You’ll find these solo’s organized by the year they were recorded.

Over the course of the 20th and the 21st century, there has been a boom in music styles which are placed in of two categories- traditional music and popular music. Popular music includes genres such as jazz and jazz fusion, swing, blues, heavy metal, rock ‘n roll, and more. Every guitar solo is incredibly different from the next. A guitar solo can vary in many aspects such as technique, the degree of improvisation, simplicity, and complexity, and so on.

A solo can either be unaccompanied works or compositions with the accompaniment of a number of other instruments or a big ensemble. The musicians that accompany a guitar solo can be a rock band or a jazz quartet, or a larger group such as a big band or an orchestra, for example. Folk music and classical music has been using unaccompanied solos n an acoustic guitar as far back as the acoustic guitar has been around. During the Baroque, musicians used the instrument as a solo voice in an ensemble such as the Baroque concerto.

What is more, each kind of guitar produces a completely unique sound and feel. Solos on a classical guitar, for instance, are typically used in the different forms of classical music such as concertos and chamber music.

One of the most popular types of guitar solos is the one played on an electric guitar. An electric guitar is played through a guitar amplifier in order to make it louder. A guitar amplifier, however, is not just a sound increaser as it also has a preamplifier as well as tone controls. Some models even have overdrive controls which allow the user to make modifications in the tone of the instrument and how it sounds.

Electric guitar solos were all the rage in heavy metal and hard rock music during the 1980s. The solos were described as ”shredding”as the sound was rapid-fire and has an irregular yet rousing sound. In fact, a good lead guitarist doing virtuosic solos was often more prised than the led singer, which is rarely the case in modern times. Advanced harmonics techniques became very widely used during that time. The subgenre of Nu Metal was extremely different from its predecessor. In fact, the genre completely abandoned guitar solos and only lead fills could be heard here and there. At the same time, grunge chose not to leave guitar solos behind for the most part, and so they were more common in that genre. Other subgenres such as pop the pop and the popular rock music either excluded guitar solos or trimmed them down significantly to a four-bar transition.

Electric guitar solos have become one of the most loved aspects of heavy metal and rock music. Some bands put their own twist on it, and others make it their signature. There are guitar solos in two part where both lead and rhythm guitar taking turns. There are also dual solos where the lead and the rhythm play complementary together.

In any case, guitar solos have been around for many a decade. Soloists and guitarists have been adding to the various techniques known before them and have been expanding the movement. Fortunately, marvelous guitar solos are now widely available to the public more so than ever before. Music enthusiasts can enjoy the plucking of a vast number of virtuous musicians despite the fact that they are no longer with us. They still inspire aspiring musicians, and their legacy serves as education for modern generations. These are some of the best guitar solos in history.

I think that we all recognize a great guitar solo, even if we don’t all agree on which is the best, or even if a solo qualifies or not. That being said, we are confident that we have found at least a few solos on this list that will match even the pickiest critics taste.