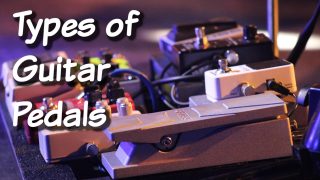 You might call them pedals, stompboxes, effects units, or effects pedals. Whatever you call them, the different types of guitar pedals on the market today influence a lot of the sounds and effects that electric guitarists are producing these days.

While pedals have been around almost as long as the electric guitar, advances in technology and digital outputs have increased the options exponentially.

There are six different types of guitar pedals. In each of these categories, there are a few different options to consider!

The 6 Different Types of Guitar Pedals

After reading this article you’ll understand these 6 types of guitar pedals and be able to pick and choose the effects and patterns that you want for your pedal setup! Lots of considerations go into which pedals will be best, from the type of genre you play to the sound you’re after!

Filter Pedals alter the frequency output of the audio signal between your guitar and amp. These pedals, especially EQ pedals, are some of the most common and most guitar players will have one on their rig.

Each instrument has its own frequency output, and the EQ (equalization) pedal helps match the guitar’s output to the amp by changing the frequencies in your signal. This boosts your guitar’s sweet spot and helps to remove harsh tones.

The wah pedal also falls under the filter category. Many great soloists, including Jimi Hendrix, made their name by mastering the versatility of the wah pedal.

It moves the entire frequency output of the guitar up and down with a rocker plate that changes the output as it is shifted.

The last two types of pedals that fall under the filter category are the Envelope (auto-wah) and talk box pedals. Both these pedals create fun effects that can be very unique but are not as common as the wah or EQ pedals.

The gain pedals category includes several of the most common pedals you’ll find in an electric guitarist’s toolbox. Either a Distortion or an Overdrive pedal are found on most rock musicians’ pedalboard, along with plenty of other genres.

These pedals all work approximately the same way, by adding something to the audio signal and adding overtones that enhance the sound in a particular way.

As mentioned, Both distortion and overdrive pedals are extremely popular. Distortion pedals push the gain past its limit, which enhances the sound but loses clarity. Soloists who really want to cut through the sound of the other instruments will often use distortion pedals to almost drown out drums or the lead guitar.

Overdrive pedals are very similar, but they produce a cleaner sound and can add character to a rhythm or lead guitar wanting to stand out.

The last pedal in this group is the fuzz pedal. This pedal is basically a supercharged distortion pedal. They are really known to boost bass tones, and you can almost taste the sound they produce.

These pedals are used to adjust the pitch of a guitar signal. In many ways, they replace the need for a capo on the electric guitar by allowing you to use the pedal instead.

This is exactly what the octaver and pitch shifter pedals do. The octaver pedal can only shift a note with a 12-step interval, while the pitch shifter is capable of doing one, three, or five notes. Both pedals are great for adding a shifting texture to your guitar playing, but both are best used on single notes rather than full chords.

The harmonizer pedal is similar to the pitch shifter but helps with chords as well as single notes. The final pedal in this group is the tuner, which while not exciting is important to make sure your guitar is producing the notes you expect it to be!

A beginner guitarist can just skip this section! Modulation pedals work by altering the tonal properties of the electrical signal, creating some very interesting effects. These pedals are probably also the least popular group but definitely have their niche.

The first pedal is the phaser, used by quite a few psychedelic rock bands over the years, this pedal creates a pulsing oscillator to change the frequency output between two positions. This effect creates a pulsing feeling of motion that often is described as futuristic.

Flanger pedals do the same thing as phasers, except with a delay on them. The last pedal in this group is the chorus pedal, which takes the original signal and alters the pitch, creating a warm, rich tone.

The last two pedals in this group are the tremolo and vibrato pedals. Tremolo pedals cause a slow increase or decrease in the volume of the signal, while the vibrato causes a fluctuation in the pitch.

Funny enough, the tremolo arm that is equipped on a lot of Fender Stratocasters should be called a vibrato arm, as the pitch is affected not by using the arm, not the volume.

While most of the other pedal types get all the attention, dynamic pedals play a vital role in allowing these others to shine. These pedals control the level and volume of the sound being produced with different effects that a mixing engineer is in charge of for studio recordings.

Compressor pedals are used to reduce the distance between the quietest and loudest volume an instrument can play adding consistency to your sound. Sustain is a very similar pedal and does much the same thing as the compressor pedals.

The last group of dynamic pedals is the volume, envelope, and noise gate pedals. These all help control the volume of the output in unique ways that can be useful depending on your guitar, amp, and other pedals.

As the name would suggest, these pedals work by delaying the original signal of the guitar. They are quite hard to get used to as you’ll play a note and not get the immediate feedback you are likely used to!

The reverb pedal is a fairly new one, duplicating the effect that you get when sound waves bounce off different surfaces. This effect helps with the warmth of the sound and many reverb pedals allow you to switch between spring, plate, and hall reverb effects.

Next is the delay pedal. As the name would suggest these pedals take a note and then delay the playback for a set amount of time. Most of these pedals allow you to adjust the playback time, feedback, and level, creating a ton of options for the sound produced.

Last but not least, looper pedals. These pedals will basically record a riff once activated and then play that back on a continuous loop. This allows a guitarist to lay down an arrangement of notes and then switch to another riff or rhythm section without losing the original notes.
Looper pedals are extremely nice for live performances.

What Guitar Pedal Should Every Guitarist Have?

Every guitarist needs either a wah-wah or an EQ pedal. Both of these pedals are extremely versatile and give the guitarist a great range of tones and effects across almost every genre.

For those that want a smooth, even sound, the EQ pedal takes away the harsh highs or the jaw-rattling lows and gives everything the perfect balance. The Wah-wah pedal allows you to accent individual notes and results in a ‘vocal’ quality to solos. Now, if your guitar amp has an EQ setting you probably can do without the pedal.

For beginners, the EQ pedal is easier to use. The wah takes a little practice to get the timing right, but once you do most guitarists won’t leave home without one! I also tend to tell beginners not to worry about pedals at all while they are learning to play guitar. It just adds one more complication you don’t need!

The next two pedals that I will normally recommend are an overdrive pedal and a delay effect unit. These two allow you to boost the energy of your guitar and help reinforce your rhythm.

What are the Most Common Guitar Pedals

The most common type of guitar pedals is the distortion pedal. It is extremely popular with electric guitarists and is one of the biggest reasons to play electric over acoustic. Rock, punk, and metal all rely on the heavy, aggressive sound that this pedal provides.

The second most common is probably the overdrive pedal, which provides a lot of the benefits of the distortion pedal but produces a cleaner sound and more sustain. One of my first bands was a blues cover gig, and this was the first pedal I used on my board for it.

How Many Guitar Pedals is too Many?

This depends on your level, but in most cases, I would say less is more. For beginners, you really shouldn’t be using more than 3 pedals. You have enough to worry about when learning the basics of guitar; you don’t need to be thinking about a dozen different effects.

If you are an intermediate or advanced player, I would recommend sticking to 4 pedals or less. This allows you the maximum amount of creativity, but also keeps your signal clean and doesn’t have too much feedback or noise. You’ll find that after playing with the different types of guitar pedals you’ll grow to like some more than others and be able to pick and choose your favorites and get rid of others.