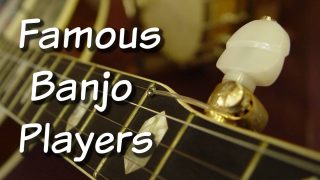 If the guitar is the most popular instrument in America, the Banjo might be the most iconic. Modern bluegrass is one of the few styles of music that arguably started here, and the best and most famous banjo players are the ones that brought it to mainstream America.

While bluegrass and Scruggs Style banjo exploded into mainstream culture in the late 60s, the modern clawhammer banjo style has been played in America for decades before that. With the banjo having roots in Africa, the instrument has a long and storied history dating all the way back to West Africa.

While most of the best banjo players in the world can play both styles, many are known for one or the other. Many of the clawhammer players on this list never played Scruggs Style, cause it wasn’t popularized or invented yet!

In this article, we break down the best musicians to play both bluegrass and old-time banjo. If you are going to emulate someone as a young or beginner banjo player, these are the greats!

As with any rankings list, these musicians are in an order that I feel is fairly accurate both to the quality of the player and the contribution to both banjo playing and bluegrass music. I’m sure some will disagree with my order, but I’m always up for a good debate!

It’s hard to put anyone else number 1 on any Banjo list. The modern form of bluegrass banjo is often called “Scruggs Style” because it uses a three-finger picking style that is commonly referred to as rolls. Before he popularized this style of fingerpicking the banjo was mostly played with a clawhammer style.

Scruggs became a professional musician at 21 and played in numerous bands including “Bill Monroe and the Blue Grass Boys”, “Foggy Mountain Boys”, “Flatt and Scruggs”, and “Earl Scruggs Revue”.

The song “Foggy Mountain Breakdown” was featured in the Bonnie and Clyde movie and went a long way to bringing bluegrass banjo to the mainstream. Scruggs has a star on the Hollywood Walk of Fame and received numerous awards in his lifetime.

The banjo and music communities lost this legend at the age of 88 in 2012 to natural causes.

If Scruggs is the most famous banjo player of all time, Trischka just might be the best. He is undoubtedly top 5. Often called the father of Contemporary bluegrass, Trischka has won a slew of awards and his name pops up pretty much anytime you are researching the banjo online, such a great influence on the community he’s had.

After releasing three albums in the early 80s with his band, Skyline, Tony went on to perform worldwide, work on Broadway musicals, have his music in movies, and even produce other great banjo acts like Steve Martin.

After all that, Trischka continues to contribute greatly to the banjo community through his teaching and lessons. He has a phenomenal course through Artistworks that we’ve reviewed and highly recommend to those looking to learn to play banjo!

Not only is Bela Fleck one of the most famous banjo players in the world, but he’s also responsible for pushing the limits of what is believed to be possible with the instrument more than maybe any other bluegrass banjo player.

He often plays with other amazing musicians such as Tony Rice, Mark O’Connor, and his wife Abigail, but when he’s not combining with other bluegrass musicians he’s push the boundaries of style for banjo.

Fleck has brought a fusion to the banjo, combining it and molding it to folk, jazz, fusion, and rock music in a way no other musician has. I’m fairly confident I’ve seen everything on YouTube involving Fleck, and each time I rewatch his performances I’m blown away all over again!

Most people that I’ve talked to in the past think I’m joking when I talk about how great of a musician Steve Martin was. Most people think of him as an actor and a comedian, but that was only a slice of his talent.

Martin actually combined banjo into many of his standup comedy acts, and released several bluegrass albums professionally. His cover of “Foggy Mountian Breakdown” is still to this day one of the best you’ll ever hear.

Unfortunately, Martin’s musical career was broken up and ultimately cut short by tinnitus, a constant ringing in the ears that made playing and performing quite difficult.

Compass Records has been the biggest independent record label for many styles of Banjo and bluegrass music since 1995, and Alison Brown and her husband Gary West are at the head of it. A lifetime of banjo genius award winner, Brown is quite a banjo player herself.

More lyrical than many other banjo players, her style and technique have led to a Grammy along with appearances and influence in a wide range of musical genres and films.

By far the youngest player on our list, Noam has gained a lot of attention for his work with the Punch Brothers, which have had several hits on popular pops charts in the last few years. Before Punch Brothers Noam played with Leftover Salmon and the John Cowan Band.

Noam won the banjo player of the year award from the International Bluegrass Association in both 2014 and 2017 and we are excited to see where he takes the banjo in the years to come!

A personal favorite, Munde played with the band the Sunny Mountain Boys in the 70s and was my first taste into the bluegrass world when my father introduced them. Munde is a world-class banjo player by all rights and has continued to blaze an innovative trail throughout his career.

Alan has also gone on to teach at several important music schools, including South Plains College.

Clawhammer banjo also referred to as old-time banjo, is a style that has lost some popularity since the fast pace of Scruggs style was introduced. Make no mistake though, some of the most famous and groundbreaking banjo players of all time were clawhammer players!

The only current artist on our list of famous clawhammer banjo players, Allison is inspired by old-time and traditional music and draws much of her inspiration from it. Even if the name doesn’t ring a bell, you’ve likely heard her play in one of her many collaborations with Tatiana Hargreaves, Molsky’s Mountian Drifters, The Goodbye Girls, and Nic Gareiss.

As someone who has always enjoyed classic bluegrass and the boom-chic-a of the clawhammer style, it’s a joy to hear de Groot continue to broaden the sound and possibilities of old-time music!

Pete Seegar was playing the banjo long before most musicians on this list and even published a book before some were born. Pete Seeger gained popularity with the Weavers in the buildup to the 2nd World War when he introduced the long neck banjo to the public, a style of the instrument still used today.

In 1948 he published “The Way to Perform the Five-String Banjo“, which numerous banjo players have cited since as being huge in their development. it was also the first time terms like “hammer-on” and “pull-off” were used!

While Don Reno was mostly known as a clawhammer player, he did popularize a style of banjo playing known as the single-string style. The results produced a style of bluegrass banjo that is quite distinct but never caught popularity the way Scruggs Style did.

Reno and Authur Smith made up the first Dueling Banjos duo as well, forever earning himself a place in Banjo’s rich history.

A member of both the Grand Ole Opry and the Bluegrass Hall of Fame, Ralph Stanley earned his reputation as an old-time bluegrass player before Scruggs made fingerstyle popular, yet he still had some of the most popular bluegrass music of the 60s and 70s.

Ralph was quite a skilled singer as well, being able to go acapella during breaks and carry the tune with even the fastest bluegrass melodies.

For anyone who has enjoyed the instrument’s music before, there are plenty of great videos on YouTube that feature these famous banjo players demonstrating their masterful talents in addition to the ones linked here!