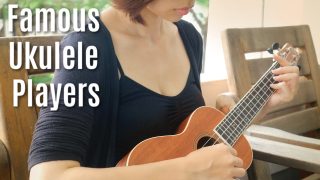 While this is kind of a bummer, it’s not completely unexpected.
The ukulele has seen rises and falls in popularity as different artists and
types of music have come and gone. Right now, with the globalization of music we
are in a great period for the ukulele.

Having a 12-year-old Grace VanderWall win “America’s Got Talent”
with her ukulele in hand helped. As did hits by Vance Joy and Jason Mraz using the
4-string instrument.

The 10 Most Famous Ukulele Players

With that in mind, we wanted to look back through the
history of the ukulele and find the most famous ukulele players, both present
and past.

So here are 10 ukulele players we feel like you should know (and look up their videos!) in no particular order!

There may not be a more well-known or recognizable song on the Ukulele than “Over the Rainbow/What a Wonderful World” by Israel Kamakawiwo’ole. This song has appeared in over 20 movies and TV shows and reached #12 on Billboard’s Hot Digital Tracks chart in 2004.

In his teens IZ formed a group called the Makaha Son’s of
Ni’ihau and go on to record over 21 albums before starting his solo career.

With a sound that almost screams his traditional Hawaiian upbringing, Israel’s voice has moved people worldwide. “For reasons that cannot be adequately explained or understood, people feel good when they hear his voice, they feel safe and they feel happy.” said Jon de Mello, Israel’s producer.

IZ unfortunately passed away at the early age of 38 from
complications stemming from a lifelong battle with obesity.  In the days following his death he was paid
tribute to by the Hawaiian government and thousands gathered as his ashes were
scattered in the Pacific Ocean on July 12th 1997 at Makua Beach.

If you’ve never heard “Over the Rainbow” take a few minutes out of your day and listen. You can thank us later.

At the tender age of 15, Grace VanderWall is already one of
the most famous female ukulele players we know of. She took America by storm by
winning “America’s Got Talent” at 12 years old in September of 2016 and
released her first album in late 2017.

She has already won quite an impressive list of awards,
including the Radio Disney Music Award for Best New Artist, a Teen Choice
Award, Billboard’s 21 under 21 list (4 years in a row), Billboard’s Women in
Music Rising Star Award, and she’s the youngest to ever be named to Forbes 30
under 30 Music List.

With a voice that has been described as “endearingly croaky”, “raspy”, and “timelessly soulful” and often accompanied by her trusty Ukulele, we can’t wait to see what Grace does next.

There might not be anyone who has the mastery of the neck and notes of a ukulele that Jake Shimabukuro has found. His fast, complex finger work made him gain popularity in his native Hawaii and Japan in the early 2000 before going viral on YouTube in 2006 and earning worldwide acclaim.

Jake is a noted performer and has done collaborations with a
large number of musicians including Jimmy Buffett, Miley Cyrus, Mika, Michael
Buble, Lady Gaga, and Bette Midler.

With almost 20 years of professional experience under his
belt (at the age of 43), Jake continues to push the limits of what the Ukulele
can do. His newest album, “Trio” has received rave reviews, including
“Gorgeous” by Rolling Stone.

He also has a one-hour documentary film that you can stream on Amazon Prime called Jake Shimabukuro: Life on Four Strings.  Jake is arguably the most famous modern ukulele player, and we don’t see that changing anytime soon.

Many of the names on this list have some connection to
Hawaii. Not James Hill, who grew up in Langley, British Columbia where the
ukulele was taught in school as an introduction to music.

James has a unique and powerful way of approaching the
Ukulele which has helped him move the Ukulele from a novel and obscure
instrument to one in the forefront of many people’s minds. His three solo
albums in the early 2000s gained him a huge following in North America, and his
collaboration in 2009 called “True Love Don’t Weep” won a Canadian Folk Music
Award.

James spot on our famous ukulele players list is cemented by the fact he is also a dedicated ukulele instructor who can be found on YouTube and Uketropolis (formerly The Ukulele Way).

James is a talented songwriter, musician and teacher and we are excited to see what he comes up with next!

You know that you’ve done something worthwhile when you are
credited with revolutionizing the traditional method of playing the ukulele. Before
Kamae the Ukulele was mostly a backup instrument, used for simple rhythm. After
Eddie it was transformed into an instrument with great potential, being used
for a wide variety of music styles, leads and solos.

Enshrined in the Ukulele Hall of Fame in 2001, Kamae was a
founding member of the legendary group The Sons of Hawaii.  He spent much of his life learning and paying
tribute to the Hawaiian culture that has renewed interest in island music.

In the 1980’s Eddie and his wife, Myrna, filmed a set of
documentaries to support this cause. Called the “Hawaiian Legacy Series” they
helped preserve the history of the islands.

Eddie Kamae passed away in July of 2017 in his home in Honolulu at the age of 89, but his lasting legacy on the Ukulele is not likely to ever be forgotten.

Daniel Ho grew up in Hawaii where he was inspired by instrumental ukulele songs and moved to Los Angeles at 18 to attend Grove School of Music before returning to Hawaii to major in Music at the University of Hawaii at Manoa.

Today, Daniel continues to perform and record music that pushes both his skill and what can be accomplished with the Ukulele. In addition, he has teamed up with Romero Creations to produce some amazing instruments including the Tiny Tenor, the XS Soprano, and the ST Concert Ukulele.

Born Herbert Butros Khaury on April 12th, 1932 in New York, Herbert performed under the stage name Tiny Tim and was renown for his high falsetto voice that was often accompanied by his mandolin or ukulele. Tim may have been the first of our famous ukulele players to reach widespread fame!

While his most famous song was “Tiptoe Through the Tulips
with Me”, Tim made countless television and movie appearances that he’s best
remembered for. He appeared on the Merv Grffin Show, the Tonight Show
and the Ed Sullivan Show.

Tiny Tim was always up to please his audience and loved both music and performing. He knew that people enjoyed laughing at him, but refused to see it as a bad thing, instead enjoying his time in front of the crowd.

A member of the Hawaiian Music Hall of Fame, Jesse Kaleihia
Andre Kalima had a huge role in bringing the ukulele from a backup instrument to
something that could be soloed with.

Through much of the 40s, 50s and 60s Jesse played with his band, the Kalima Brothers and later recorded an album with two of his sons. During this time he was credited as one of the first to plug in his Ukulele and with popularizing the Tenor size.

In the saloon-based music scene of the early 1900’s a broken
down, poorly maintained piano was all many performers had. To battle this, Cliff
Edwards picked up a ukulele as his own accompanist and the rest is history.

The most popular form of show at the time was the American
adaptation of Vaudeville, and Ukulele Ike was synonymous with the best of these
shows. This let him to show business where he appeared in over 100 films. Most
notably, he was the voice of Jiminy Cricket and sang the Oscar-winning “When
you wish Upon a Star” for Pinocchio.

While many of his accomplishments were done without the Ukulele, he is definitely one of the most famous ukulele players in history and he did as much as any performer of the era to popularize the instrument and was induced into the Ukulele Hall of Fame in 2000.

If Grace VanderWaal is the most popular current female ukulele
player, it’s only because that spot was vacated after over 60 years by Genoa Keawe.
A native Hawaiian born on O’ahu, this icon was the inspiration for so many of
the other Hawaiian artists we have on this list.

Genoa’s songs were mostly recorded between the late 40s and early 60s and have become mainstays of Hawaiian music even today.

There is our list of famous ukulele players! We know that this is a very debatable topic so please let us know if we missed someone you feel should be on this list! As always, we’d love to hear your comments below!