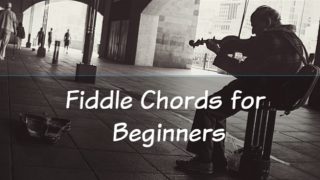 As a fiddler or a violinist, you won’t always be playing chords while playing with a band. If you are echoing the band’s melodies you very well may be playing chords, so a normal place to start learning is fiddle chords for beginners. This gives you a solid base and allows you to start playing songs early.

Just like most instruments, there is a multitude of ways to play each chord. In this article, we’ll only be going over basic chords in the first positions, or high up on the neck. As you learn the neck and you’re bowing improves you can move down the neck, but to start, stay high!

This article is aimed at helping absolute beginners, we want to help you learn to play basic chords on the fiddle. Once you have these five beginner fiddle chords memorized and you’re able to play them effortlessly, you’ll be able to play enough songs to let you work on more advanced things like bowing technique and playing double stops!

The first thing you need to know before you start learning is a basic understanding of the neck, or at least a notation chart. We’ve included our basic chart below for reference. By knowing the notes of the chord you are trying to play you’ll be able to adjust your left hand to finger chords correctly when you find your hand placement slightly off.

Because of the lack of frets on the neck of a fiddle, it is important that you become familiar with the different positions and notes before attempting to play any chords. Once you can accurately position your fingers you are ready to start to attempt playing basic chords.

Before you even attempt to play easy fiddle chords you should spend time each day placing your finger on each note. Using a electric tuner while you play is a great visual way to have feedback for what you’re playing.

Fiddle technique, both with your left hand and with your bowing arm, only comes with dedicated practice. Make sure you’re practicing playing the chord the way it’s supposed to sound. If your bow strokes are resulting in choppy, broken chords go back and reposition everything until it sounds perfect.

The G major chord is played by having your first finger goes on the B note of the A string and the 2nd finger on the G of the E string. Both the D and G strings are open. This is the easiest of the basic chords and a great place for beginners to start!

It also might be a good idea to get your hands on a fiddle or violin chord chart, and to start learning to read sheet music. While bluegrass songs and oldtime fiddle is often played with chords, classical music will still be played off of sheet music.

Bowing any of the chords that involve more than the thinnest two strings can be difficult. Each string bowed is described as a “stop”. Therefore, a chord in which you bow three strings is a “triple stop”. The correct technique is to bow the strings in pairs and to spend most of the time in contact with the thinner strings, not the thicker ones.

There is a basic explanation of this on ViolinMasterClass and in the video below. Bowing technique lessons are some of the most helpful to a beginner to the fiddle, and if you have the money to invest can be a great help.

One of the first lessons that absolute beginners normally receive is how to play the easy chords on the fiddle, which can be complicated since you don’t have the benefit of frets. Before you can play solos, play-along tracks, harmonies, or even playing backup for a group you’ll need to know the beginner chords and notes!

Interesting in more fiddle content? Good news… we have you covered!

Old-Time Fiddle for the Complete Ignoramus!
$8.99
Buy on Amazon
Bestseller No. 3