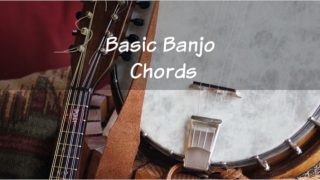 Playing the 5 string banjo is not much different from playing the guitar, but where the differences do happen make transitioning between the two difficult. The first of these differences, is the the shape of some of the five string banjo chords.

Since the banjo has a shortened bass string it leads to some big differences that you to be aware of. Whether you are a beginner, or a guitar player making the switch, you’ll need to familiarize yourself with the new tuning and banjo chord shapes. In this article, we’ll teach you five banjo chords you be able to learn quickly so you can start pluckin’.

The first thing we need to cover is standard tuning for the five-string banjo. Standard tuning is often called G tuning, or Open G tuning. As we mentioned before, the low g string is not strung through the nut of the instrument. On traditional banjos, the 5th string is attached at the 5th fret, as shown below.

The most common tuning you’ll find is a g D G B d. Notice that the first and 4th strings are both tuned to the “D” note, just an octave apart.

Similarly, the peg string and the 3rd string are both “G” notes. For a very detailed discussion on why the 5th string is attached where it is, and what effect it has see Music – Practice and Theory.

An interesting byproduct of the shortened g string is that banjo chords are normally made up of four notes (one for each string). This is true of open G tuning and most other tuning configurations you’ll find on the 5-string banjo!

​A tuning that often gets confused with open G is standard C. This is actually a predecessor of the g tuning setup. We wanted to mention it specifically because we have seen many chord charts written for this tuning of the 5 string banjo.

The only difference between the two configurations is that the 4th string is lowered from a D to a C in open position. The C chord that will will show later in the article sounds much better in this configuration because the bottom of the chord gets a low C. Many people prefer this sound and will play the banjo in this configuration.

If you want to know more about banjo tuning check out our Ultimate Guide to Banjo Tuning.

Standard G Tuning on a five string banjo includes 7 keys: A, B, C, D, E, F, and G. The chord fingerings that are included in this group include 1,4,5 and 7ths.

The 1,4, and 5 is basic music theory and is something you will often see in many forms of western music including folk, country, blues and rock n’ roll.

In this arrangement you will have 1 correspond with the key of the song. For this example we’ll use the key of C. If the song is in the key of C than the first chord is also a C chord. The G chord would be corresponding to the 4 since it is four away, while the A chord will be the last chord as it’s five away from C.

As you learn more and more chords you can often add a 7th chord into the mix, often in place of the 5. In our above example, this would mean you would play the C, G, and A7 chords in your song.

Because the 5th string is tuned to a “G” note, unless you fret that string your root note will always be a “G”. Because of this, most banjo music is written in the “G” family of chords.

Of all of the chords for the five string banjo, this is the easiest chord to pull off because you basically touch nothing. There are no strings to fret on this one. Just strum or pick down or up the strings, and you’re already playing an open G chord! Easy, right?

The C on a 5 string banjo is a little bit harder, but still manageable. For this, you’ll be using three fingers. Press your index finger on the 4th string, your middle on the 1st fret of the 2nd string, and your ring finger on the first string at the second fret as well.

To make the D7 Chord, take your pointer finger and press it on the second string at the original fret, and your focus finger lying on the third string at the second fret. This is an easy chord that can be played in succession with the G chord.

For the E-minor chord, you just have to redo the C shape we’ve taught you and press your pointer finger from the second string at the first fret. That leaves you with just the middle finger on the fourth string and your sphere finger on the first twine at the moment bother. as well as that’s it!

The A chord is a little more difficult of a chord for many to play, but introduces barre chords to banjo players. By holding down all four main strings on the 2nd fret with your index finger you get an “A”.

You’ll likely want to play around with different hand shapes for this chord to see which is best for you!

With these chords at your arsenal, you can start to play a few simple songs. Make sure as you practice these chords you either strum the strings or perform a basic finger picking pattern. This will enforce the habit of independently using both hands.

While this covers the very basic five string banjo chords and will allow you to play many, many songs, you definitely want to keep add chords slowly but surely to increase your versatility!

We like to put about 5-10 minutes a day when practicing the 5 string banjo to introduce and practice new chords!

If you are still struggling to learn the banjo, Noam Pikelny has an amazing course over at Artistworks we highly recommend. You can also jump over and read our full review of Artistworks!

Are There Chords on a Banjo?

Yes! All stringed instruments, including banjos, are played by holding down different strings to make a chord! When you strum or pick the strings the sound that results is known as a Chord.

How Many Chords does a Banjo Have?

There are 7 major chords, A, B, C, D, E, F, and G. Each of these have minor and 7th variations. Each of these chords can also be played in different ways depending on what fret position you are looking at on the neck.

While these are just four of many chords, they are some very common to many popular songs. With these four you’ll easily be able to pick up a TON of songs as well as many of the 5th, 7th, and minor versions of each chord.  Please check out the rest of our work on Banjos to keep learning about one of our favorite instruments!