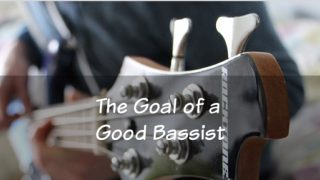 Playing Bass guitar is not like playing any other instrument. In fact, unless you are the rare bassist like Flea from Red Hot Chili Peppers, you may not even be noticed. The job of the bassist is so important, though, almost every band you can name relies heavily on the bass player.

The Bass player is important for both the Rhythm and the Harmony in any band. The Rhythm part is fairly obvious, if you tap your foot to any song it’s either the bass player you’re hearing or the drummer, and many times it’s a combination of the two.

The harmony side of a bassists responsibility is not as obvious to many, though. When the human ear processes sound it has to sort out the different notes, Notes that make up a harmony. The ear naturally relates all the notes it hears according to the lowest note played, according to the bass (root) note.

This is where the first, and most important job of a bassist comes in, and where it differs from most other instruments.

So, combine the two responsibilities and you get the first goal of playing Bass.

The steady rhythm is the part, as we already stated, is obvious. Music sounds better with a consistent rhythm. This is technically each individual band member’s responsibility, but the bassist and drummer are very important to help the others stay in time.

On to the harmonic responsibility. We already said that playing the full note can create a muddled, unclear sound. The solution to this problem is fairly simple, by simply playing the root note you can get a clear, deep bass note without any of the “Mud”. This is also an easy way to stay on time. ​There is a series of articles at StudyBass that goes further into detail on the subject.

To use our previous example, let’s say the song we are playing is in the Key of C. For the sake of simplicity let’s assume the chords involved are the fairly common trio of C, D, and G with one bar on each note before repeating.

To define the sound of this song you could easily strum four bars on C, followed by four bars on D, and finally moving your finger to the “G” strum four more bars. As long as each note you play was in time, you’d be fulfilling the first goal of a bass guitar player.

Yes, playing this progression for an entire song could get slightly repetitive, even boring. This is just a starting point, though. Once you understand this basic concept you can start to add notes as appropriate. For example, playing the next note in the Cmajor chord (E) might still sound clear and can be added in each time you play C.

There is a fairly cool, and quick shortcut so you can play complete songs while you learn the entire fretboard. Check out this video below for the complete shortcut.

We feel like beginner bass guitar players need to learn this lesson…. even before learning chords, or slap and pop, or funky bass lines. The role of a bass guitarist is not as clearly defined as many of the other members of the band.