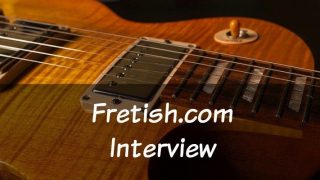 Rewind the clock 5, 10 or fifteen years. Would anyone have imagined that we would be able to press a button on our phones and minutes later have a person pick us up in their vehicles to safety drive us to our destination? Not us, that’s for sure.

Now, imagine that that “sharing economy” that brought us Uber, Lyft, and AirBnB extended to an area closer to our hearts. Imagine it extended to guitar equipment.

Sam Tharp did just that. He developed a website called Fretish.com. This site brings musical instrument owners who are willing to lend their instruments (for a price) to those in need of short term rentals.

So what is Sam’s history with the guitar and music, how’d he come up with the idea, and who can this service benefit? We ask all those questions and more in our interview below!

StringVibe: What is your background with the guitar?

Sam: Ibelieve I started learning the guitar “late” in life. I grew up in a household where my mother played piano and my uncle (who was always around) was a self-taught guitarist. Yet, it wasn’t until 1986, when I was 18 years old, that I decided to take lessons. I saw Journey in concert at the Capital Centre in Landover Maryland and witnessed Neal Schon give a flamboyant performance. Neal was not a potted plant during solos. He’d go directly to center stage and start playing (sometimes with just his left hand on the neck doing hammer-ons and pull-offs) to the crowd. He would play a lick while pointing to the right side of the stage seeking audience feedback. And then he’d walk over to the left side of the stage and do the same thing. I remember walking out of the show, telling myself that I would sign up for guitar lessons the very next day. And that’s what I did.

My first teacher was a gifted lead guitarist. He taught me various modes and scales. He focused on the technical aspects of playing – how to pick, how to play arpeggios, etc. But, I never really learned songs from him. Just riffs and snippets of rock tunes. Over the next 20 years, when I did my daily practice, I would spend 45 minutes doing my technical exercises. Then I’d put my guitar back in its case and wouldn’t touch it until the next practice session. I wasn’t really playing music. It was almost like a jogging routine for my fingers.

Then, in 2007, my daughter was taking violin lessons at the Concord Conservatory of Music. My wife and I went to a fundraising even for the Conservatory. Playing at that event was Juanito Pascual, a renowned flamenco guitarist, who was also an instructor at CCM. My wife half-jokingly said to me at the time, “Why don’t you take flamenco lessons with Juanito? It would help your daughter stay motivated to do her violin lessons.” So, I said yes. Two weeks after I started taking flamenco lessons, my daughter announced that she was quitting the violin. However, I stayed with the flamenco lessons for the next two years. Even when I was finished with flamenco lessons, I continued to exclusively practice and play flamenco until 2011. It was then that I discovered YouTube and the endless amount of guitar lessons across every musical genre.

Between 2011 and 2015, I spent up to two hours per night learning/playing rock and roll songs via YouTube. For the past two years, I’ve slowly started to write and record my own songs. If I had to do it over again, I would probably reverse everything and start by learning to play songs. I feel like I only became a proper guitarist about six years ago.

What is Fretish.com and how did you come up with the idea?

Fretish is a peer-to-peer guitar rental marketplace. There are two sides to this marketplace:

1. Owners/Sellers: If you own music instruments that are under-utilized, then you can monetize the equipment by renting it out. Perhaps you could even earn enough money to add to your collection. Instrument owners can also sell their gear outright through Fretish. Listing an instrument is free, but there’s a reasonable service fee that Fretish collects for every transaction (11%).

2. Renters/Buyers: For musicians who like trying different instruments – in search of an elusive tone – or have a short term need for a particular sound, they can rent the guitar/bass/amp/pedal without spending hundreds to thousands of dollars.

There was no single “ah-ha” moment when the concept for Fretish formed. The idea gradually crystallized over the past couple of years. I’ve spent most of my professional career building out marketplaces of various types. So, based on that collective experience, it just seemed obvious to me that the “sharing economy” should be extended to apply to musical instruments.

Who is the service designed for and who can benefit from it?

1. Hobbyists: Fretish “de-risks” the purchase of musical instruments. If you think you want a Paul Reed Smith Custom 24 guitar, then you should try it before you buy it. You should be able to plug it in to your own amplifier to make sure it produces the sound you were looking for.

2. Touring Musicians: Frind temporary guitars and other gear should yours get delayed, damaged or stolen in transit.

3. Recording Musicians on a budget: Get that distictive sound of a special instrument before heading into the studio to lay down some tracks. Instead of shelling out $8k for the Gibson L-5 Archtop, rent it for a couple of days at a fraction of the price.

1. Anyone with one or more guitars which go unplayed for extended periods of times. Earn passive income from your unused gear, meet fellow musicians, and rid yourself of the guilt that your instrument is not being played.

What geography does Fretish currently cover and what are the plans to expand?

Currently, Fretish serves musicians in the Boston and greater New England area. By the end of 2017, we plan to expand into New York. And, if everything goes to plan, we’ll spread to Nashville and Los Angeles by the middle of 2018.

Anything else you’d like to share with the StringVibe audience? How can readers learn more about your service?

Fretish is not simply about commerce. It’s a community as well. Music brings people together, and that’s what Fretish strives to do – to bring musicians together in a spirt of discovery, freindship, trust and respect.

The most direct way to contact me is through the site Fretish.

What a cool service. What an exciting way to test out, shop for, and put to use that wall full of guitars gathering dust.

What do you think of the service? Leave us a comment below to let us know your thoughts!

Lastly, if you liked this interview check out our full list of interviews where we talk to professional musicians, teachers, and companies that are involved with the instruments we love!

Guitar: The World's Most Seductive Instrument
$9.78
Buy on Amazon