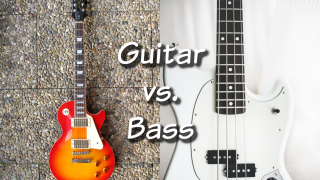 When picking a stringed instrument, the choice between guitar vs. bass might not be as simple or as clear-cut as you may think. As with many things, much of this decision comes down to personal preference.

If your hero is Flea from the Red Hot Chili Peppers, it’s likely that you’ll want to play the bass. A Clapton fan, on the other hand, should probably pick up a six-string. Many of us, like myself, are simply fans of music, so both are appealing.

Either way, in this article we’ll cover the difference between the bass and the six-string guitar so you can make an educated decision as to which you want to learn (first!).

While the bass is often called a bass guitar, and it belongs to the guitar family of stringed instruments, it has some qualities that separate it from the six-string guitar. Let’s look more at these.

The first difference between the guitar vs. bass is the scale length. The scale length of a six-string guitar is commonly between 24” and 25.5”. The short-scale bass guitar is normally 30” with a long-scale, often called a standard scale, which is 34”.

Most bassists use the standard because they are easier to play. To get the deeper sounds iconic to a bass the strings need to be thicker. This makes them a little tougher on the fingers and a little more difficult to fret.

The longer neck on the bass guitar leads to it having more frets than a standard 6-string as well. Bass guitars commonly have 24 frets, while guitar necks normally have 20 frets.

Six-string guitars have, you guessed it, 6 strings. Bass guitars on the other hand only have four. While both styles of the guitar have some variation (you can get 8 and twelve-string guitars and four, five, and six-string bass), six and four are the standard.

Bass guitar strings are thicker and longer than a 6-string. This helps them ring out with the lower notes, but can also make them a little less forgiving than standard guitar strings.

While these two instruments share the same notes, the bass guitar is tuned one octave lower than the standard guitar. This allows the bass to ring out lower notes even when playing the same notes.

Role of the Guitar vs. Bass in a Band

Along with the drums, the bass guitar provides the backbone and the rhythm for the song. If you are looking for a specific sound in a band without needing to be front and center, choose the bass guitar. The bass is what gives the band its rhythm, and without it, there would be no song.

The guitarist can either play and support the rhythm or they can venture off and embellish with solo riffs. While the lead guitar player and lead singer generally get the glory, the band would be nothing without the bassist and drummer!

Is Guitar Easier than Bass?

The guitar and the bass are two different instruments that require different skill sets and knowledge bases to play so neither is necessarily easier to learn than the other.

For instance, a guitarist generally will be playing chords while a bassist plays individual notes. Learning and remembering the different chord shapes can be more challenging than learning individual notes, especially for beginners.

Individuals with smaller hands may struggle with the wider, longer neck of the bass and the thicker strings. Both can be difficult to navigate, especially for the first few months while playing the bass.

In the end, it’s all a matter of personal preference and comfort. If you want to learn to play a 6-string guitar, or if you want to be able to play either instrument, there’s no need to hesitate; just get out there and start playing!

Which Instrument Should I Choose?

In the end, the choice between playing the bass and the guitar comes completely down to preference. Both instruments will give you the feeling of being a musician, and both will get your heart racing as you shred away on your favorite song.

Here are a few questions that might help you choose:

While none of these questions definitely answer the question of which instrument you should choose, they do get you thinking about which might fit your personality.

I played guitar for almost 5 years before learning the bass and while a guitar will always be my instrument, there are plenty of times when I have more fun laying down basslines. Also, I enjoy playing some genres more on a bass guitar, like when I’m playing jazz or funk nothing beats playing the bass!

Bass vs. Guitar: The Final Note

As you can see, the bass is not necessarily harder to play than the guitar. It all comes down to what your goals are as a musician and what instrument best suits your playing style.

Both will take time to learn, but if you’re willing to work hard enough, doing both will always do wonders for your playing – but ultimately it’s up to you! So if you have been wondering whether guitar or bass is easier for you, the answer is: it depends on what your goals are and what you enjoy!