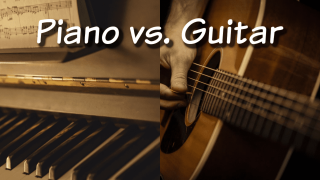 Physically, the Guitar vs Piano debate seems pretty simple. After all, the guitar is smaller and has fewer notes, while the piano is larger. If that seems like an obvious decision, then think again! The small size of the guitar means players have to be fast and nimble; their fingers are constantly on a new string of an instrument with a shorter scale length.

On the other hand, bigger instruments give you more room to maneuver across different parts of your body. They also tend to have longer scale lengths, which lends itself nicely to classical music and compositions.

So, which instrument should you choose? Guitar or Piano?

In this article, we cover all the factors that you probably want to know before spending the money on either instrument, lessons, or learning materials!

Are the Guitar and Piano Similar?

The guitar and piano are actually quite similar despite their obvious differences. To start with, both instruments belong to the string family. The strings on the guitar are quite obvious, but the piano has several hundred more of them! Each key is actually attached to a string which vibrates and creates sound when the corresponding key is struck.

The chords on a piano and a guitar are the same as well. They are played differently, but the notes are just as important as they are on the guitar. With a guitar, different combinations of notes are held down to create a chord, while on the piano each note is played individually.

Both instruments also share another similarity, namely that they both require memorization and understanding of musical theory. Chordbooks arguably make this easier on the guitar, but more on that later!

Guitar vs Piano – Which is Easier to Learn?

Both instruments have their benefits and components that make them easier. The guitar makes it much easier to learn beginner songs and play them simply. You can find a million YouTube videos showing you how to play each chord and you can teach yourself basic strumming.

The piano, on the other hand, does not require the technique that the guitar does, a key sounds right regardless of how hard, soft, or solidly you play it. If you don’t fret a string right on the guitar it will buzz or deaden the sound.

Music theory is also much easier to learn on the piano. Each key corresponds to a single note and the keys are laid out in a fashion that is easy to remember and learn. The fretboard on the guitar takes serious time and effort to memorize.

So, when asked which is easier to learn, guitar or piano, this is how I like to explain it. The piano is easier to reach a basic understanding of and play a few notes. The guitar has a little bit more of a learning curve, but after that curve, you are able to play a wide range of songs and riffs. Once you get past the beginner stages of piano you still have a lot of learning to do before playing any classical compositions.

To illustrate this point a little further. Getting to the point with the guitar where a player knows the G, C, and D chords, can switch between them easily, and can strum in time might take a few months. Once they do know these things though, they can play hundreds of songs and even many popular ones.

The first day you sit down at a piano you can play some basic songs just by being shown which keys to hit in which order. But to play anything serious, even to play basic songs that are recognizable in pop culture, could take months. Not to mention some classical compositions that are well known.

Piano vs. Guitar: Which Should You Choose?

Most people, when picking up an instrument, understand it’s a long-term project and not something they’ll learn overnight. This means that the question of which instrument is easier to learn loses a little of its importance.

When looking at the cost and portability of a piano vs. a guitar there isn’t much of a competition. You can get a decent guitar for $200-$1000. Pianos will cost you at least $1000, and often much, much more.

Guitars are also much easier to move around while pianos are not. The size and weight of a piano make it incredibly difficult to take anywhere, and the cost makes it prohibitive to do so. If you want to play for friends and family or take your instrument on the road with you when you travel, the guitar is hands down the way to go.

Now, there are many portable keyboards that are much more like a guitar in both cost and portability, but a traditional piano is both more expensive and less portable than a guitar. The first point in guitar vs piano goes to the guitar!

The Actual Sound of the Guitar and Piano

This is where both instruments really shine. Pianos, in particular, have a sound all their own. They are unique in the string family from a sound perspective and the way they are played.

The sound of a piano is nuanced and detailed. The sound of the piano is often described as a warm, or bright sound; it’s also said to have a bell-like tone to it at times. Pianos are capable of playing a wide range of sounds, from soft background music to loud, bombastic numbers.

The guitar still has a very distinctive sound, but instruments like the ukulele, banjo, and mandolin all have similar layouts of notes, strings, and sounds that make them less unique than that of a piano.

While the piano, and even more so the keyboard, have their place in modern music, they really shine in a classical setting. Guitar, on the other hand, has gained a huge foothold in modern music. Almost all of the mainstream music genres in today’s society use a guitar as the main instrument and sound. Name a top rock song from the last 10 years that doesn’t have a guitar. I’ll wait.

Classical composers, however, have been writing music for guitars since the beginning of time. It’s only recently that we have found a place in modern music for the piano and keyboard.

The Importance of Piano Lessons and Guitar Lessons

Many people feel that you can teach yourself guitar, but you will rarely hear that about the piano. For this reason, most universities offer piano lessons for students at their conservatory. Pianos are often weighed and graded by the school’s music department and the student is completely responsible for paying for the lesson and how much time is spent on each piece.

Guitars are also tested to some degree, but there are many pop culture guitarists who have learned to play through their ears and still made it big.

It’s probably easy to understand that the layout of the notes on a piano and a guitar is quite a bit different. A standard guitar has six strings and about 24 frets, thus there are 144 notes on the guitar. A piano, on the other hand, has 88 keys and thus 88 notes.

The range of a piano is far greater than the guitar though. A piano covers 7 octaves plus a few extra notes while the guitar only covers four octaves.

Because of the way the guitar fretboard is laid out the same note repeats itself in multiple places. Notes that occur in two different spots on the guitar are referred to as unisons. This never happens on the piano, each of the 88 keys has a unique note.

The piano does have up to eight keys all assigned to one note, but each of them is in a different octave. For example, the C note shows up 8 times. They are all the same note, but each one rings in a unique octave.

Learning How to Read Music

If you want to learn sheet music and music theory, the piano is definitely the way to go. It takes much less time to learn how to read music notation on a piano than on the guitar. If you are ever looking for help in learning how to read sheet music, it’s better to go with piano than guitar.

It’s not that guitar players don’t want to learn, it’s just that they don’t really need it as much. Guitarists have plenty of resources online that will tell them the chords and the strumming pattern of a song. Even if they don’t know the chord, they can look that up, and after a bit of practice have it.

There is much less of a need for guitarists to learn theory, tabs, or sheet music until they are much more advanced players. Pianists will start learning both theory and how to read sheet music from day one.

Just like the cost of the initial purchase, the maintenance and upkeep of a piano are far greater than that of a guitar. Pianos have thousands of pounds of tension in their strings whereas guitars only hold a few hundred.

Guitar players can tune their instrument in a few minutes and change strings for less than $50, often doing the job themselves. Piano technicians often charge at least $150 to tune a piano and re-stringing a piano is an intensive process that will need a professional to do and can be quite costly.

Can You Learn Both Instruments at the Same Time?

You can definitely learn both instruments at the same time as long as you have enough spare time. Generally, I recommend beginners on both instruments spend at least 30 minutes a day practicing. If you wanted to learn both, you might be able to break this down into 30 minutes every other day, just know it will slow down the learning process on both.

If you choose to learn both at the same time and can’t practice both every day then the best way to do it is to create a schedule that allows you to alternate between the two. For example, on Monda, Wednesday, Friday, and Sunday I practice the piano and on Tuesday, Thursday, and Saturday I practice the guitar. The next week, I switch it up so that guitar gets four days and piano three.

This might also be a good way to go if you easily get frustrated. By giving yourself a rest day on each instrument you don’t get burnt out by spending too much time practicing just one instrument.

I hope you enjoyed this article on the differences between guitars vs. pianos. While you can learn both, I recommend picking the instrument that is more attractive to you and not trying to learn both at once.

At the end of the day, both instruments can be extremely rewarding and fun to learn to play. It probably won’t be a quick or easy journey, but once you learn these instruments they are a skill you can enjoy and continue to work on for the rest of your life!