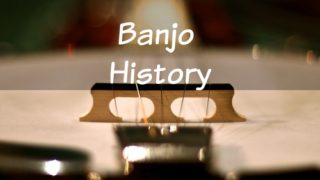 The Banjo as it exists today is a quintessentially American musical instrument. It performs an integral role in bluegrass, country, jazz as well as folk music. It wasn’t always this way, though, the history of the banjo is an interesting story.

The percussive rhythm, the articulate notes, and the unique melodiousness makes the instrument highly versatile. Where did it all start though? Stay with us and we’ll tell you what we know.

The History of the Banjo

The evolution of the modern banjo is an interesting story in itself. The earliest known prototypes appeared around the seventeenth century in the Caribbean region and showed striking resemblances to western stringed instruments in the form of fingerboards and tuning pegs.

There is evidence even more recent evidence of drum-like instruments with strings stretched out over it in many West-African cultures including the ngoni and the xalam. Both of these instruments bear a hide covered drum and stings and bear resemblance the the modern banjo. In fact, there are more than 60 other instruments similar to that originating in the region.

The most similar of all of these instruments, the akonting not only looks like a banjo, but it have a movable bridge, and has the long neck that extends through the body as early banjos did.

To put the nail in the coffin, the akonting is played with the ball of the thumb and the nail of the index finger, a picking pattern style that any banjo player will recognize.

In the 1830s, the instrument was popularised by Joel Walker Sweeney, a minstrel musician who took the banjo to both sides of the Atlantic. By the 1850s, pupils of Sweeney created training programs and books on how to play the instrument. This period could have also led to the start of modern Bluegrass, as Fiddle and Drum’s players formed bands with Banjo players.

The 1850’s were also the first time metal strings were used as a cheaper, longer lasting alternative to the professionally made gut strings.

During the late years of the 19th century, the Dobson brothers are given credit for the addition of both frets and resonators.

The Civil War and World War I both played important roles in the spread of the Banjo. Soldiers were exposed to the happy, uplifting sound of the Banjo during the worst of times and brought it home with them.

On the flip side, the Banjo nearly died out during the Great Depression as the sound definitely didn’t fit the dour mood of the time.

Over the years, different styles and techniques of banjo playing have evolved and so has the banjo itself. A number of distinct types of the instrument are available today, each suited to a particular style of music (read more about the varied types in our article on the topic HERE).

How many strings does a banjo have? That is a question that has become more complicated to answer as well! They also come in a diverse range of prices, starting from mass-produced $150 models to the highly customized and handcrafted premium versions.

It is not surprising that modern artists like Bela Fleck have managed to adapt banjo sounds even in jazz, classical and fusion contexts. Bands like Mumford and Sons have also contributed towards a rekindled interest in playing the banjo by adapting this beautiful instrument into their music. To fit into many bands, the electric banjo has even started gaining mainstream popularity.

With just a little knowledge and practice, you can play a ton of easy songs with the banjo and it is an instrument that is both unique and extremely fun to play

For an even more detailed history of the Banjo, check out BluegrassBanjo’s article on the topic, which includes important dates and details.​

Where did the Banjo Originally Come From?

The Banjo was inspired by instruments that originated in West Africa and were brought over by slaves from those regions. These instruments, the ngoni and the xalam, are both hide covered stringed instruments that bear resemblance to the modern banjo.

Who Invented the Banjo

Credit for inventing the modern banjo goes to Joel Sweeney. Often called Joe, he is credited with designing and promoting the current 5 string banjo in the form we know it today.

Is the Banjo Irish?

No. The modern 5 string banjo was invented in America, although it has roots from instruments that were brought over and played by the slaves. The four string tenor banjo might be an Irish instrument, but the popular and traditional 5-string banjo is American.

The Final Note On The History of the Banjo

While the banjo has roots deep into the heart of Africa, the modern 5 string banjo is a quintessential American instrument that is essential to southern culture, bluegrass and folk music, and history!