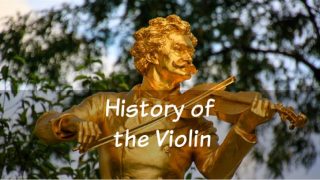 Like many of the stringed instruments we follow on StringVibe, the Violin and Fiddle have long, distinct histories. Although it is believed that the modern form of the violin emerged sometime in the middle of the sixteenth century, stringed and bowed instruments had already been present in Europe and central Asia much before that.

Today, historians are of the opinion that the violin underwent a gradual evolution to the instrument we know today. It is our opinion the history of the violin’s evolution is as fascinating as the music it creates!

The History of the Violin and Fiddle

We have divided the history of the violin into three sections; the early days of the fiddle, the Italian contributions, and the modern-day fiddle and violin you’d buy for a beginner or a young musician wanting to learn this instrument!

The Early History of the Violin

Ancient records reveal that the violin and its predecessors were present in Europe as early as the Middle Ages. However, many scholars believe that the earliest form of bowed, fretted, and strung musical instruments had actually originated in Central Asian regions (like the Morin Khuur from Mongolia).

These instruments then traveled to parts of Europe through the many dominant trade routes of the day. European artisans adapted these foreign instruments and created initial rough specimens of stringed instruments.

Early evidence of stringed instruments can be found in sixteenth-century European paintings. Before the violin, there were its predecessors, including the Medieval Fiddle, the Lira da Braccio, and the Rebec.

The Contribution of Italian Violin Makers

The violin gained its present form of symmetry from the experiments of Italian violin makers. These craftsmen tried on different combinations of the bow, the neck length, tension in the strings, the length of the fingerboard, the arching, the bridge height as well as the overall length of the instrument, all to perfect the sound quality of the violin.

The Amati family was pivotal in formulating the basic proportions and design of the modern violin (they equally contributed to the art of Cello making as well).

The earliest surviving violin is called the Charles IX and was made by Andrea Amati in 1564. The Amatis further cemented their seat of honor in the history of the violin by training apprentices like Francisco Ruggieri, Antonio Stradivari, and Andrea Guarneri who all went on to make a name for themselves in the field.

In fact, Stradivari is often referred to as the greatest violin maker of all time. It is believed that the sound quality of a violin improves with maturity. Hence, it is no surprise to note that antique Stradivari’s have been auctioned off for millions of dollars.

Craftsmen in the 18th and 19th centuries further went about refining and fine-tuning the form and structure of the violin in order to meet the evolving demands of an orchestra’s repertoire. What emerged after centuries of careful mastery was a versatile instrument capable of rendering haunting performances both in a solo as well as an orchestra’s performance scenario.

Present Form of the Violin and Fiddle

The violin, as we know it today, is vastly different from the three-stringed instrument that can be seen in sixteenth-century European paintings. The arrival of several innovative adaptations like the chin rest for the violin, and the shoulder rest for the fiddle, have not only made the instrument ergonomically convenient but also increased its adaptability to powerful high range virtuoso performances.

Legendary composers like Bach did not have the benefit of a  chin rest. Thus, the player had to balance the instrument and hold the bow, resulting in constricting movement of the arms which made effective use of vibrato non-existent. Classic Violinists and Fiddler also had to deal with a shorter bow that tended to produce a muddier sound.

The introduction of the chin rest is accredited to Louis Spohr. He invented the addition to the violin in 1820 revolutionizing the way violinists played in concerts. Another great milestone was the modern form of the bow (introduced by François Tourte), which with its ideal length, weight and balance smoothened out powerful performances, especially in the higher ranges.

As the popularity of the violin as a musical instrument grew, more and more musicians and composers started to discover the flexibility and versatility that the instrument had to offer.

Thus it was adapted into different genres of music. Today it forms an integral part of many traditional Celtic, Irish, Hungarian and Gypsey tunes. It is also used as a key instrument in other genres like country/western, blues, bluegrass, jazz, and fusion. The haunting quality and smooth texture of the violin, in fact, present an ideal interface for blending with a wide variety of other instruments.

Today’s violin is a product of evolution over a period of nearly five centuries. It is pivotal to music as we know it and will stay relevant for ages to come. Here’s to the sounds of the strings singing.

For more information on all things Fiddle and Violin, stay on the site and read up on all our other articles!