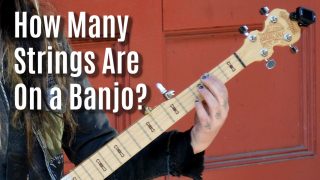 How many strings does a banjo have? Seems like a simple question, right? Not necessarily. Unlike a guitar, that has 6 strings, or a ukulele, mandolin, or fiddle, all of which have four strings, the number of strings on a banjo is not always constant.

So, to clear up the confusion surrounding the topic we look at the the four common types of banjos, how many strings they have, and what music styles they lend themselves too!

How Many Strings Does a Banjo Have?

Banjos are a fun instrument to play, particularly if you are into country music, bluegrass, folk music and even jazz. Learning to play the banjo will lead to a lifetime of music where you can play along with the band or just strum on your own.

Banjos originated around the 17th century in Africa where there were similar instruments made of hollowed out gourds. However, the Banjo really took off as an instrument in the 18th century in America and small pockets of Europe, notably Ireland. Each of these different areas morphed the banjo to fit their style of music, thus creating a handful of similar, yet different, instruments.

So, how many strings does a Banjo Have? Banjos are commonly found with 4, 5, or 6 strings. The 5 string banjo is by far the most common, but the 6 string has been gaining popularity as an alternative to the guitar. The 4 string tenor and plectrum banjos are not as popular, but definitely have their place in music.

Want to know more? Keep reading for details on the four, five, and six string banjos!

The 5 string banjo is the most popular of all banjos. The vast majority of professional banjo players choose the 5 string variety of banjo and you can find this instrument in Bluegrass, Country, Folk, Jazz, and Irish music, just to name a few.

Five string banjos are very unique from other stringed instruments. The 5th string is mounted at the 5th fret and is often referred to as the “thumb string” or the “drone string”. This string being significantly shorter than the rest is often picked with your thumb and gives the banjo the sound that it is so famous for.

The 5th string ends in a tuning peg on the side of the instrument. If you’ve never played an stringed instrument before, this might not seem weird, but coming from a guitar or a ukulele this may feel awkward and in the way. Don’t worry, you’ll get used to it!

One of the best things about the five string banjo is the tuning. The open string notes are G-B-G-B-D, meaning the G chord is played in open position. This also leads to the C and D chords being extremely easy to play, letting beginners play easy banjo songs relatively quickly.

This instrument lends itself to a versitale set of playing style from flat-picking to variations of fingerstyle.

With the clawhammer style, The hand assumes a claw-like shape and the strumming finger is kept quite stiff. The thumb rests on the fifth string and uses a heavy downpick motion with a lighter up-pick which makes the distinctive clawhammer sound.

If you want to start playing banjo, the 5-string banjo is a widely popular option with great instrument options, plenty of materials to help you learn, and the authentic banjo sound.

Six string banjos are becoming more popular now a days as many country music artist turn to it to liven up and give a distinctive sound to their music! That being said, Louis Armstrong famously had a six string banjo in his band for many years.

Unlike the 5 string banjo in which you just learn 3 chords and a finger picking style and you are on your way, six string banjos have that traditional banjo sound but are tuned like a guitar. As a consequence, 6 string banjos are natural for those already experienced in the guitar, but are more of a challenge to learn for those who have never played either.

The 6-string banjo is normally tuned the same as a six string guitar would be, E-A-D-G-B-E. This means as a guitar player you can grab a six string banjo and play immediately, but your sound will be completely different! For those times when you want to have real flair and stand out, there is nothing like a 6-string banjo.

Just in case the difference in the 4-string, 5-string, and 6-string banjos didn’t make your decision on which to buy hard enough, we have two different type of 4 string banjos. The tenor banjo, and the plectrum banjo. The big difference between the two is the length of the neck, and how they are played.

The 4 string tenor is widely used to play either jazz or Irish music. The Irish musicians tend to like their tenor banjos with 17 frets because the shorter scale length makes the fast triplets that are a staple of this music easier to play. The other common size tenor banjo is the 19 fret instrument.

The tenor banjo is tuned like a viola, which is C-G-D-A with the G string being the thickest, and closest to the musician. It is said the first tenor banjos were created for violin players who wanted something they could play in popular bands that wouldn’t accept violin players.

You will also see the 17 fret tenor banjos tuned an octave below normal, being a G-D-A-E. It is important to note though you’ll need a thicker set of strings to play a tenor banjo this way. Standard strings loose too much tension and lose tone clarity.

A 4 string plectrum is very similar to a 5 string banjo without the drone string. Just like a standard 5-string banjo the plectrum banjo has 22 frets. The instrument gets its name from how it is normally played. A “plectrum” is another word for a flat pick, so these banjos were called plectrum banjos to distinguish them from their five string counterparts, which are normally picked.

Plectrum banjos are primarily played in dixieland jazz groups and are commonly tuned C-G-B-D. The 2nd most common tuning is that of the highest four strings on a guitar, D-G-B-E. This is the same tuning as a baritone ukulele, and makes a perfect instrument for those players to switch to.

While it is normal to play these instruments with a pick, fingerpicking them lends itself to some truly unique and classic sounds thanks to the lower tension on the strings.

There is one more 4-string variation, the Banjolele, that is such a special instrument we dedicated an entire article to it!

The banjo is a fun and very versatile instrument. A lot of your choice between the 4, 5, and 6 string versions of the instrument will be made by how you want to play it, what type of music you’re playing, and your prior musical knowledge. That being said, it’s a great first instrument and has a unique sound.

For more information on chords, tuning, and the best banjos out there, check out more of our Banjo section before you leave!