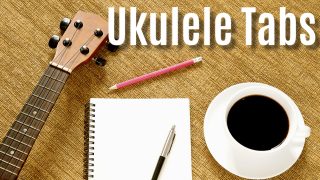 When most beginners start playing Ukulele or guitar, they use chords to start playing songs. Afterall, most stringed instrument are taught by learning to play chords first. Both ukulele and guitar players will learn the chord shapes for C, G and D on their first day with the instrument.

Once you move beyond the basics and start wanting to play songs by fingerpicking chord shapes alone are often not enough.

Music tablature is a very simple form of musical notation that can be used for all stringed instruments, from the guitar to the ukulele, fiddle and even the banjo.

The good news is that reading uke tabs is not very hard once you get the hang of it. In fact uke tabs have a lot of benefits over playing from chords, with only one major drawback.

Ukulele tabs are basically a drawing of your fretboard with numbers and symbols on it representing frets, notes and more advanced techniques like hammer-ons and slides.

To the left of the tab you will see a letter next to a row of dashes. This represent the each of the strings and the note that corresponds to playing it in open position.

For standard ukulele tuning, that is G-C-E-A, with the G chord being closest to your head, and the A string the thinnest, and nearest the floor. If the song is not in standard tuning, you’ll know what notes your open strings need to be at by the letters on the left.

Next, you will notice that on each line, or string, there are numbers scattered around. Each of these numbers represent a fret. A “0” is an open string, a “1” symbolized you’ll hold down the first fret, a “3” for the third fret, and so on.

So, looking at the image of a basic ukulele tab that we showed earlier, to start this piece of music you would pluck the “A” string, or the thinnest one, while holding down the first fret. Just as you’d read a book your eyes would follow the tab to the right and the next note would be the 2nd string with the 2nd fret held down. The top string, the “G” string would then be played while the 3rd fret was held down. Then the 3rd string with the 4th fret held down.

As you can see, for this song you’d repeat this sequence of notes twice.

So, using the image above, instead of the 2nd fret being played on the “E” string like we had in the first example, the second note in the sequence would be an open “E” string!

How Do I Read Chords in Tablature?

A ton of song resources you’ll find online are written out in chords instead of using tablature. For many people who started by learning chords it’s also very useful to be able to see a chord in tablature, recognize it, and let habit put your hand into the chord shape.

In the image above, you can see how the common chords C, Am and G look in tablature. One of the drawbacks of tablature that we’ll cover in more detail is timing. Because there is no mention of timing when playing a chord, you’ll want to refer to the recorded piece of music to see if a chord should be plucked or strummed.

These are chords you’ll often see. In fact, we use these 3 for many of our favorite beginner ukulele songs!

If you’ve made it this far in the article congratulations, you can read almost every piece of tablature you’ll find. The basics of music tablature are firmly within your grasp!

There are some less common and advanced techniques that you’ll run across occasionally that we haven’t covered. This next section is dedicated to some very specific types of movements that will be made with the left hand (or fret hand) that are used to give a piece of music a very distinctive, original sound.

The Hammer-On and Pull-Off

You’ll see an “h” in between two numbers sometimes, or a “p”. These represent hammer-on and pull-offs

Both of these techniques change the sound of the note being played and add a different sound to the plucked string.

Using the example above, for the hammer on, you would pluck the note while holding the first fret. While the note was still vibrating, you’d quickly hit the 3rd fret, changing the length, and therefor the sound of the note still ringing out.

The pull-off is the opposite. You would pick the note while holding the 3rd fret and then release that note to an open string.

Similar to the hammer-on and pull-off, the slide changes the sound of the note by changing the fret that is being held down while the note is ringing.

Bends are interesting because you are literally bending the string up and so it equals the pitch of the 2nd note shown in the tab.

If you add a return to this then you move the note back to its original place. Depending on the desired sound you can also release the bend, which will sound different than a return since you ‘open’ the string.

The vibrato is designated with a “ ~ ” or sometimes just a “v”.  This technique changes the pitch of the note and is used heavily in blues and rock music.

The Downside of using Ukulele Tabs

While we think that ukulele tabs are the best way to fingerpick uke songs, they do have a couple noticeable downsides. First off, the lack of timing notation. Secondly, where do you find them?

Unless you are playing a song that you know well you may struggle with a very important part of a song when using tablature. When to play the notes!

There is nothing in a tab that lets you know the rhythm or timing for the song. In addition, if there are pauses or changes in the tempo of a song you’d never know it by just reading a tab.

To combat this problem, we like to look at tabs next to sheet music for the same piece. This will give you a complete story as to how the song is supposed to be played!

While you can find a decent number of guitar tab sites online, there are significantly fewer Ukulele tabs posted. This is partially because ukulele music doesn’t tend to use as many hammer-ons, pull-offs, slides and advanced techniques as something like rock or blues guitar does.

Music Theory for Ukulele: Master the Essential Knowledge with this Easy,...
$16.86
Buy on Amazon
Bestseller No. 2

How to Play Ukulele: A Complete Guide for Beginners
$10.99
Buy on Amazon
Bestseller No. 3