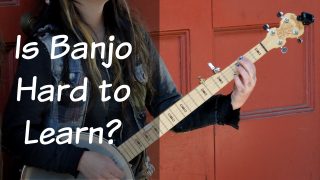 Picking up any new hobby can be difficult, you just know there is some learning time and effort involved in something new. A common question I hear all the time; is it hard to learn banjo? It’s a good question, and not quite a simple one to answer.

Every instrument has a different learning curve but the factors that weigh into these differences aren’t always obvious. The goal of this article is to answer many of the common questions and help a beginner understand that the banjo is actually a fairly easy instrument to learn!

Is it Hard To Learn Banjo?

No! Banjo is generally considered the easiest stringed instrument to learn! Because of the open G tuning and the lighter gauge strings, beginner banjo players are able to play a variety of songs within a month or two.

Open G Tuning: Banjos in standard tuning is what is called open G tuning. This means that when you strum the instrument without any frets pressed down, the resulting note is a G chord. This is one of the most popular chords in the world!

By pushing down all the strings in the fifth fret you’ll play a C chord, and pressing them all in the 7th fret results in a D chord. These three chords open up thousands of song possibilities and make the learning curve to your first song much shorter than a ukulele, guitar, or fiddle.

String Gauge: Banjo strings are much thinner than a six-string guitar, and about the same as most sizes of ukulele. This makes them much easier for beginner players to press down and fret.

I’m not saying it won’t take any time to learn at all, but learning banjo is done much quicker than other instruments because of these factors. Learning any musical instrument is a challenge, so I would be lying if I said it was easy to learn banjo, but it’s better than other options!

Is Banjo Easier to Learn Than Guitar?

Yes! Most people consider the standard banjo tuning and string gauge easier on beginners than the guitar. It may seem almost too easy to be a real instrument, but that’s why Banjo is considered the easiest stringed instrument to learn how to play!

The guitar is much more difficult for beginners because you have to press down on all six strings at once, which requires much more strength in your fingers. Playing simple chords like the G, C, and D are also more difficult.

Is Banjo a Good Beginner Instrument

The open-back banjo is a great beginner banjo. It is easier to learn than many others and if you decide to switch to a guitar or ukulele, many of the things you learned playing banjo will apply in one way or another on your new instrument.

How Long Does it Take to Learn to Play The Banjo?

We like to tell people that it will take longer than you think. When I get a new banjo student I will often have them set smaller goals that are less arbitrary. Things like playing different chords, or switching between chords, or strumming at a certain beat per minute (bpm).

For years I have heard that banjo players who want to be proficient should plan on spending about 2000 hours, about 416 days, practicing before they should expect to play more or less anything they want on the instrument.

2000 hours will put you at a performance level, possibly a professional level if you are talented.

Other factors can affect the length of the learning process greatly. Getting a good course to help you learn banjo online or getting yourself a teacher and in-person lesson will probably help you learn to play banjo much quicker than if you try to teach yourself!

Malcolm Gladwell has promoted the theory that it takes 10,000 hours of practice to become World Class at any skill. But between that 2000 hours and then 10,000 hours, you will only make minute improvements that most people will never understand.

Which Banjo Style is Easiest to Learn?

There are basically two styles of the banjo. Bluegrass banjo is often called Scruggs Style, and Clawhammer, also known as old-time banjo.

Clawhammer banjo is easier to learn than Scruggs Style for several reasons. Clawhammer is similar to a strumming pattern if you are familiar with the guitar. Once you have the clawhammer rhythm and stroke, it doesn’t change. All you have to do is make sure you’re playing in time and the chords are correct.

Scruggs Style banjo is generally played much faster than old-time music and uses picking patterns often called rolls. These rolls are made up of four to eight notes and produce the complicated, complex sounds that banjos have become known for.

While the bluegrass style of banjo can sound amazing, the speed and complexity of the rolls make it much harder to learn than clawhammer.

Banjo is a good instrument for beginners because it requires less strength than the guitar and has fewer strings, making it easier to pick up quickly. Even knowing it’s a fairly easy instrument to learn, beginner banjo players who want to become professional should plan on spending about 2000 hours, about 416 days, practicing before they’re fully proficient.