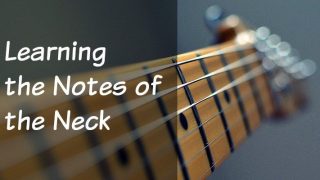 Learning to play an instrument can be an incredibly fulfilling experience. Learning guitar notes, on the other hand, can seem like memorizing information for a high school exam. The importance of learning scales for playing the guitar is universally accepted.

Sometimes, though, the importance of learning to recognize the notes on a fretboard is equally important. In this article, we’ll give you 5 steps to learning guitar notes the easy way. Once you have learned the notes, you can turn your knowledge of notes and apply it to scales, which we cover in our article on Scales.

We’ve made this guide for beginners who may be new to reading music, guitar tabs, and even a single note. That being said, by the end of the lesson we hope you’ll be know about sharps and flats, a scale pattern, and a basic understanding of music theory!

A good place to spend part of your guitar lesson time as a beginner is by learning the names of the natural notes on the neck. Although learning the names of the notes might not be too difficult an exercise, memorizing their locations on the fretboard can be. Knowing the note of an open 2nd string, 5th fret or 6th string, third fret off the top of your head is very useful.

After that, you can work on recalling the locations and notes on the fingerboard, while playing, which is another cup of tea altogether. This will require committed practice and you might want to start with a few minutes of exercise per day.

Many new musicians skip learning the notes and go right to guitar chords for beginners, we think a guitar lesson should start with reading music and single note. As a teacher, this is also a great warmup method before a full lesson!

We shall start with learning the name and note of the six strings in thier open position. This simple exercise will acquaint you with the basic reference that you can refer to when you progress further to more complex melodies and chords.

Start with the lowest string and play each subsequent string from low to high without putting your fingers on the fretboard. Say the names of the strings aloud as you play them to help the process of memorizing the notes (From low to high, they are E-A-D-G-B-E)

When you are just starting out, it is a good idea to repeat this exercise for a few minutes everyday, from low to high as well as in the reverse sequence. Also, remember that this is standard tuning, which most songs and guitar tabs are written in. If they are a step, or half step off, they will note that as it completely shifts the notes and corresponding major chord positions.

As you gear up to progress to further stages of guitar learning, it is best to be well-equipped. It is a great idea to keep a chart handy, which shows the location of notes and is something that you can refer to check your accuracy while you play. A couple symbols you’ll encounter other than the standard letters are:

Knowing the sharps and flats, and which notes have them, is very easy to do and we’ll show you a few tricks later in the lesson.

In our tutorial, we will demonstrate how to remember both the vertical and horizontal fretboards. Once you have recognized the open-string notes (the E-A-D-G-B-E sequence that we explained above), you just have to move up and down the fretboard one fret at a time.

The sequence of the notes will always remain the same. Try remembering notes in both directions, but you’ll probably find you prefer one or the other. Pick that particular style that you feel comfortable with and go with it.

Step Three: Memorizing the Notes on the Neck

The first exercise is to learn the first twelve notes of the guitar. This is nice since you can simply remember that the notes in the English alphabet are A through G.

Next up are a few quick tips for learning the sharp and flat notes.

The picture below is the full fretboard with notes indicated all the way to the 12th fret. After the 12th fret the notes repeat themselves, so the 1st and 13th frets are the same, 2nd and 14th, etc.

This version, unlike the Horizontal method, is very dependent on where you start. We will start by playing the first five notes on the sixth string, which is referred to as low E. As you can see from the fretboard, starting from the open-string note (i.e. when you do not have a finger on the fretboard) as you move up one fret at a time, the notes will follow the sequence- E, F, F# (or Gb), G, G# (or Ab).

Now, the next note is “A”, which is also the open 5th string. In a similar sequence, when you play the open-string note first and then slowly move up the fretboard one fret at a time, the notes will be in the following sequence, A, A# (or Bb), B, C and C#(or Db).

The next two notes will be found on the fourth string called D. The open string note is D and the note on the first fret is D# (or Eb). This completes the full cycle of notes or an Octave. We will talk more about them in the next step!

The other main way to memorized the fretboard is simply to follow the notes down the neck of the guitar. If you know the notes of the open strings (E, A, D, G, B, E) and the order of the notes you can quickly identify a note of any fret.

We prefer this method to learning the guitar notes because as long as you make sure you’re in standard tuning and you’ve spent the time to learn the order of the notes on the neck, you can figure out any string/fret combination.

For example, if you can remember the 2nd thinnest string is a “B” note then you can walk up the fretboard. If you need to know the 5th note on that string simply count off the notes B, C, C#, D, D# E.  By simply knowing the open strings and the order of notes you can identify a fret horizontally.

There are a few other tips you can use as you grow more familiar with the fretboard:

Other Tips for Learning Guitar Notes

For more tips on learning the fretboard and strategies to do so check out GuitarSkillBuilder and WikiHow.

As you practice the first 12 notes, make sure that you speak the names of the notes aloud as you play since this will help speed up the memorizing process, and with repeated practice your fingers will be able to recall locations of notes on the fretboard, much like they start recalling positions of keys on a QWERTY keyboard.

Now that you have managed to master the first twelve notes of the guitar, its time to move on to the next concept of guitar playing – the octaves. The vertical learning method you learned forms the first octave. After the first fret on the D string, the 12 notes repeat themselves on a higher octave. Now the goal will be to recognize each instance of a particular note on the fretboard.

It is best to start very slowly at first and gradually work up to a pace when you start recognizing the positions where the notes repeat themselves on the fretboard.

Next, you can start playing all the notes in a sequence, but try to play all the instances of each note on the fret at a time. As you slowly start attaining precision and accuracy, you will be well on your way to mastering the guitar fretboard.

Imagine that the guitar neck is broken into blocks of four frets. Whichever key you want to play in, your hand will be positioned on that block of frets. Two octaves of every pitch of a scale is located in a four-fret block on the guitar neck. It is worth mentioning, recognizing major scales is not a very difficult task on the guitar as all scales depend on their root note.

As we mentioned before, we have a detailed article on Learning Guitar Scales which is a great guide for beginners and you should definitely check out as you become more familiar with the notes.

Mastering the notes on the guitar might sound like a slow and cumbersome process, but it does open up the pathway towards mastering the art of playing the guitar in a fluent manner. Thus, the painstaking process is worth it. After all, once the notes are your friends, there is no music that you will not be able to create.

On your journey from beginner guitar, to rhythm guitar, to lead guitar rock legend, learning the notes and fretboard memorization are important, but often over looked steps. With a little time and effort though, you’ll have learned the notes and be on to more exciting and fun guitar topics! And when you get to that point, read up on the rest of our guitar related news and information!