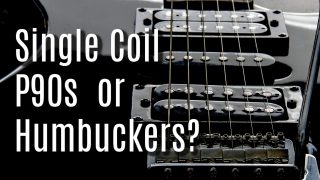 There would be no such thing as an electric guitar without pickups. That is a fact. Which is the best pickup? Single Coil vs P90 vs Humbucker? Not such a clear answer! In fact, this is something that everyone seems to have an opinion on and few agree on!

This article is about the different types of electric guitar pickups and how they function and sound. It’s also a comparison of single coil, P90, and humbucker pickup types. Which one would you prefer?

What do Pickups on a Guitar Do?

The pickups of guitars are responsible for generating electrical signals that are transmitted to the amplifier, which then produces sound. The pickups on a guitar are typically made up of a magnet, coil of wire, and magnets.

Without pickups, electric guitars would not be able to produce any sound. There would be no electricity passing through the strings of the guitar.

Unlike an acoustic guitar, which generates sound from the hollow body, solid body electric guitars need electricity and amplification to produce sound! Pickups are an important part of this process.

This article focuses on the different types of pickups you’ll find on an electric guitar, but location of these pickups matters too. We have a great guide to the difference between neck and bridge pickups to help you understand pickups even more!

What is a Single Coil Pickup?

Single coil pickups were popularized by Leo Fender and are likely what people think of when talking about pickups. These thin bars that are commonly found on Stratocasters and Telecasters are still one of the most popular pickups today.

Single coils are very simple in comparison to other pickups. They consist of a coil with one magnet at the top, and that is it. These pickups don’t use many moving parts and can be quite resistant to unwanted noises. Also, they require fewer components to operate which also makes them very low maintenance.

Legend has it that Jimi Hendrix played some early Strat Single Coils from the now famous Seymour W. Duncan line of pickups that were customized for him by Roger Mayer and placed on his famous white Stratocaster.

What is a Humbucker Pickup?

Humbucker pickups have two coils. One coil is for the signal and the other is for noise. This is done to reduce hum, or certain unwanted frequencies in a guitar pickup.

Humbuckers are typically a lot more complicated than single coils and have many more parts that make up the complete pickup assembly. The two magnetic “bobbins” also make the humbucker twice as wide as a single coil pickup.

Kurt Cobain used Seymour Duncan JB humbuckers on many of his guitars that were big enough to fit them. On his Fender style guitars, he preferred mini-humbuckers like the Seymour Duncan Hot Rails.

What are mini-humbuckers? Glad you asked…

The mini-humbucker, although these days found mostly on Gibson guitars, was invented by Epiphone before they were acquired by Gibson in the late 1950s. Originallly, it was Epiphone’s effort to create their own look and feel to the electric guitar, just like Gibson and Fender had done.

As you would have guessed, the mini-humbucker is a quite a bit smaller than the original. This allows the mini to pick up a shorter length of vibrations, producing a clearer tone, more high-end content, but less output than the original.

The last pickup is the P90, which look like humbuckers but are constructed more like single coils. The P-90 was designed by Gibson and uses a bar magnet design. From a construction standpoint, the are essentially linear humbuckers, which are still quite popular in the modern era for their traditional sound.

The P-90 was actually replaced as Gibson’s main pickup with the arrival of the humbucker in 1955, but have seen quite a resurgence especially in the punk movement,

The P-90 has two different common casings, the dogear and the soapbar. The dogear is simply screwed into the guitar and can’t be adjusted. The soapbar on the other hand is able to be mounted at different heights.

Differences between Single Coil vs P90 vs Humbucker Pickup

After reading this far you should have realized that the first difference between these pickups is size and shape. When looking for other differences in the great single coil vs P90 vs humbucker debate, you need to look at the the active electronics that are used, the magnet, and the type of wire, and how each effects the sound the pickup produces!

The physical differences lead to big differences in the tonal output of each. Single coil pickups are often described as bright and crisp, or full and broad. Humbuckers on the other hand have a smoother sound that is commonly referred too as thick and warm, but also punchy and aggressive. The P-90 pickup and the mini-humbucker tend to fall in between.

Due to their construction, single coil pickups tend to catch a lot more in interference than humbuckers do. For this reason, it can be hard to get a clean sound from them when either gain or volume is turned up significantly. Humbuckers naturally cancel hum better.

Thanks to the tendency to cancel hum and sound better at high gain and distortion settings, humbuckers are often found in jazz, hard rock and metal. Slash, Angus Young and Kirk Hammett are all well known humbucker players.

Single coils are much more commonly found in lighter rock, indie, folk and blues music. Players like Hendrix, Mark Knopfler and John Mayer all prefer single coils. The P-90 fell out of favor for a long time, but has found a new home in the punk genres. While the mini-humbucker is versatile, it’s mostly likely to be found in a jazz musicians hands.

What is the Best Guitar Pickup?

Frankly, there is no one best guitar pickup. The best pickup for your guitar depends on your style, your preferences for tone and sound, and the type of music you prefer to play.

Single coils are best for clear, crisp tone and are great if you want to play detailed, mellow, bright solos. Humbuckers can be warm and sound clean, even with a ton of gain and volume. If you like to rock or play metal, these are your best bet!

As we mentioned, P90s and mini-humbuckers are a great in between option. The balance the strengths and weaknesses of the single coil and humbuckers.

In today’s market, many instruments use a combination of pickups to help balance out the output. If you can’t decide which ones you want, or are new to the electric guitar, maybe this is the best route until you have some experience and a better idea which type of pickup is best for you!

As we said, there is no one best pickup. Single coils are great for jazz, pop, and blues. For metal or punk, you’ll love humbuckers. P-90 and mini humbuckers are the best of both worlds, so if you like a wide range of tones and are willing to master the basics of guitar playing then these are the pickups you want!