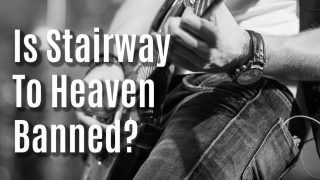 It is almost comical how often we are asked: “Why is Stairway to Heaven banned in guitar stores?” People seem to be baffled by this, especially considering how well know and liked the song is overall. In fact, many consider it one of the greatest rock songs of all time.

“Stairway” was released in 1971 on Led Zeppelin IV. The song, and album, quickly become famous and to this day the opening notes are instantly recognizable.

So why the hate for this song in guitar stores? Is it actually banned or is it just poor etiquette to play it in a store?

What is the Forbidden Riff?

The beginning of the controversy around “Stairway”, and the movie that first brought the stigma surround the opening of this song was 1992’s hit movie Wayne’s World.

At one point in the movie, Wayne and Garth, played by Mike Myers and Dana Carvey, are in a guitar store. Wayne picks up a guitar and starts to belt out a riff that is supposed to be the opening chords to “Stairway”. Interestingly enough, the riff wasn’t accurate to avoid copywrite!

Anyway, a few notes into the song a staff member stops Wayne, pointing to a sign that reads “No Stairway to Heaven”. Wayne looks at the camera and says “No Stairway. Denied.”

Now, while the movie was using this clip as a chance to insert another witty one-liner, many people took it seriously!

The joke has carried on so much that the opening notes to Stairway to Heaven have often been referred to as “The Forbidden Riff”. This riff is so overplayed and widespread that many truly believe you should not play the song in guitar stores!

Why is Stairway to Heaven Banned in Guitar Stores?

Stairway to Heaven is not actually banned in guitar stores.

In fact, I hear this song played more often than not when I’m shopping around in my local music shops, and every time I do I think of this question and remind myself to write an article about it!

While you will never be kicked out of your local guitar center for playing the forbidden riff, you may not want to do it anyway.

Many guitar teachers will introduce guitar riffs to their students using the opening bars to “Stairway.” It is a fairly easy arrangement and something that is cool for new guitarist to show off to their friends and family. Afterall, everyone knows this song!

Is Stairway to Heaven Easy to Learn?

One of the common beliefs as to why Stairway is banned in guitar stores is because it is easy to learn and it is the first riff so many beginners learn.

While it may be a riff that many beginners learn, it is definitely not because it is an easy song to play. In fact, we can think of dozens of riffs that are easier.

The opening few bars of Stairway to Heaven includes several barre chords and fingerpicking, neither of which are true beginner skills. A few of the opening notes include fingerpicking two strings at once, which is definitely a step or two past an entry level skill.

We think the reason so many beginners, and guitar teachers, tend to put Stairway early in their lessons is because it is such a recognizable and popular song. It is easy to impress your non-guitar playing friends when you break out this riff.

Why Do Guitar Store Employees Hate Stairway To Heaven?

When I was a teenager I worked at Target and then a local sporting goods store during the Holiday season for about 7 years. Each year I had to listen to Christmas Music over, and over, and over again. To this day I don’t like listening to Christmas music.

I imagine that this is how guitar store employees feel about Stairway to Heaven. If every other, or every third person who came in to shop guitars sat down and started playing the same song, you’d get tired of it too!

So, while Stairway to Heaven isn’t banned in guitar stores, most employees will probably appreciate it if you choose to play something else!

Was Stairway to Heaven Stolen?

One of the common theories as to why the introduction to Stairway has been termed “the forbidden riff” is that people believe it was stolen.

In 2016 a band named “Spirit” sued Zeppelin for copyright infringement, claiming the song copied their song “Taurus”.  This claim was even stronger because Spirit had opened for Led Zeppelin on a tour shortly before the release of Stairway.

Multiple juries have ruled in favor of Zeppelin and lead guitarist Jimmy Page on this issue, even through several appeals.

It is not uncommon for guitar players and musicians in general to borrow riffs, lyrics, and bits from music they like and admire. You can make your own call, but here is a side by side comparison of the two songs!

How To Play The Forbidden Riff: The intro to Stairway to Heaven

Stairway to Heaven is a fun song to play, especially the introduction. Who doesn’t want to learn the music played by a legendary guitarist like Jimmy Page?

Honestly, we can play it, and while we wouldn’t play it in a store… that doesn’t mean you shouldn’t learn the song if you want to!

Stairway to Heaven and Other Overplayed Songs

While Stairway takes most of the brunt for overplayed songs, it is no where near the only popular song that is overplayed.

Just like Stairway is not actually banned, none of these other songs are either. That being said, we still wouldn’t test our luck playing one of these.

They are all great songs, and you can find tabs for them all over the web, but we might just reserve them for practice, playing in front of friends, and not for your local music shop!

What Songs Should You Play Instead?

Guitar store employees will probably appreciate you playing something they haven’t heard that day. That means that you want to play songs that aren’t as easy.

Even if you pick out a super easy riff to play, if it is one from an obscure band it is much more likely.

If the store isn’t busy you might even be able to ask a guitar store employee to show you a riff they like real quick. You might get a cool little music lesson out of it, and this is the best way we’ve found to get personalized information on each instrument!

If you have written any original music, this is a perfect time to show them off. Not only is it something that many guitarists never do, but it will be appreciated by the guitar store employees too!

Useful etiquette in a Guitar Store

Other than not playing Stairway, what are good etiquette pointers that every new guitar player should know so they don’t make a mistake while visiting their local music shop?

Here are four things (other than playing Stairway) that you should avoid doing while in a guitar store!

This is just a good rule for life in general, but it holds true in a music store. That expensive Taylor you were playing? Don’t leave it propped up on the stool you were sitting on.

By putting instruments back where you found them you show respect for the employees, the instruments, and maybe most importantly, for the music.

Isn’t it weird that guitar stores have areas that are behind closed doors? These doors often lead to humidity-controlled areas of the store. Real wood is sensitive to temperature and humidity changes, and these rooms are carefully controlled to keep instruments in top shape.

When you are in a guitar store make sure to pay attention to signage on the doors to different rooms. These rooms always have signs that clearly state to close the door behind you!

Last but not least, if you close the door behind you then you have a room to yourself to play whatever song you’d like!

Keep your Amp Under Control

Just because you like to jam to ear shredding, soul shaking metal riffs doesn’t mean that everyone in the store wants to hear them. If you’re an excellent player then this is annoying, if you are a beginner guitarist then you have no right to turn your amp up.

Most guitar stores will have dedicated soundproof rooms just for this purpose. Ask an employee to use one so you can play as loud as you’d like! This has the benefit of privacy, getting to feel out the instrument and amp combination, and you won’t annoy everyone else in the store!!

If the store doesn’t have soundproof rooms, ask an employee where they’d like you to set up. This is by no means an unreasonable request, but by asking you show you care.

Also, follow your best practices when using an amp and turn it down before plugging in, or unplugging, your guitar.

We’ve all heard the loud pop that can occur from an amp being turned up too much when a guitar is plugged in. It is startling, annoying, and downright rude.  I’ve never seen someone kicked out of a music shop for playing Stairway, but I have seen several people booted for popping an amp!

Respect the Environment You are In

Most guitar store employees are there because they are musicians themselves, or they at least love music and care about instruments. These are not your general retail employees.

These people are normally a great resource for common problems, the best equipment, tuning, gadgets and industry news. Not to mention, they likely have years of experience that you can lean on.

We can count the number of times we’ve walked into a guitar store and not had a good interaction with the salesperson we talked to. We love guitars, they love guitars… it’s easy to have a good conversation if you just show them a tiny bit of respect!

Lastly. People are in a music shop to look at instruments. They are not there to hear you perform like you’re on tour. There is nothing wrong with playing the instruments you see, but there is a fine line between you checking out the sound of a guitar and you showing off!

So, there you have it, you’ll never have to ask, “Why is Stairway to Heaven Banned in Guitar Stores?” again! Just remember, there are better and much more appreciated songs to play than Stairway and you won’t win any friends by playing it!

If you don’t have a music store near you, then this isn’t something you have to worry about! Check out our guitar buying guides to find your newest instrument!