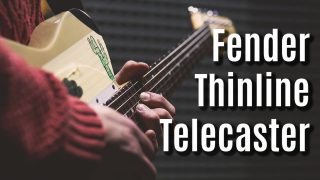 The Fender Telecaster is one of the most easily recognizable guitars ever made. Its iconic bright twangy sound has been used for countless songs and shows around the world. Many people are unaware of the Fender Thinline Telecaster though!

What is the Thinline Telecaster, and how does it vary from the Tele that we are all familiar with? Good questions!

In this article we are going to cover many of the most common questions surround this version of the Telecaster and recommend a few instruments if you’d like to get your hands on one!

What is a Thinline Guitar Exactly?

A Thinline guitar is a semi-hollow bodied electric guitar with an f-hole. The Thinline is a model of guitar from Fender that they have added to both their Telecaster line and their Jaguar.

These guitars have a solid wood block running through the center of the instrument, parallel to the neck. This block allows for the bridge and pickups to be mounted, along with reducing the amount of feedback produced.

So, why create this version of the Telecaster guitar? What are the benefits?

What Benefits Do You Get With a Semi-Hollow Guitar?

Up until 1968, the only way you could get the Telecaster was in the traditional solid body version that had always been manufactured.

There were two problems with this. First, the original telecasters are heavy. Just don’t try to play a telecaster without a guitar strap.

The 2nd, the Ash wood that Telecasters are traditionally made from was in short supply at the time, so Fender was looking for options.

Thus, in 1968 the first Fender Thinline Telecaster was born.

Lighter than the original with a stylish f-hole and completely different tonal range.

How Does a Thinline Telecaster Sound Compared to a Solid-Body Tele?

The traditional Telecaster is known for its sharp, bright and twangy sound. The Thinline rounds out some of the sharpness and is warmer.

If you are familiar with the Telecaster sound, you can still tell that the Thinline belongs to that guitar family, the sound is just a little off what you’d expect.

Jazz musicians in particular tend to like the fact that the Thinline has a lower bass range and the twang is more pronounced. That being said, there are a wide range of musicians who love the Thinline.

Who Plays a Thinline Telecaster?

Many musicians have picked up a Thinline for various songs, including Bob Dylan and Jimmy Buffett. Some guitarist chose to make the Thinline their first pick, and are actually known for it.

Comparing the Fender Thinline Telecaster vs the Solid Body Telecaster

Both the Thinline and the Solid body version of the Telecaster are great electric guitars that were made to be versatile. It has always been one of the big selling points of this guitar.

That being said, there are some notable differences.

Generally speaking, we prefer the Thinline for rhythm guitar. The extra resonance that comes from the semi-hollow design create a more complex sound than the solid body does. On the flip side of that, picking individual notes is sharper and crisper on a solid body instrument.

You will also have less sustain with the Thinline, which is another reason to go solid body if you’ll be playing solos or picking a lot of individual notes.

Best Thinline Telecaster on the Market

There a LOT of nice Thinline Telecasters to choose from when trying to pick out the best one.

To help with that, we actually picked out three. We have the best overall thinline, a good intermediate option, and then our best budget thinline!

This guitar reminds us of Back to The Future when Marty gets up on stage and absolutely shreds. The light minty green with the cherry red pickguard is just a cool look! Oh, and did we mention this has all the bells and whistles you can possibly get on a Tele?

Our next option is a good option if you are stuck wanting a nice instrument but can’t spend the dough to get the top of the line!

Last but not least on our list is the budget option for Thinline Telecasters!

One of the best things about Fender is they’ve put a lot of effort into offering really good guitars with their budget line, Squier. These instruments won’t have the finest electronics, and the they definitely save on the cost of the tonewoods used, but this is by no means a bad instrument. It’s almost insulting to call it a “budget” option!

There you have it! Everything you wanted to know about the Thinline Telecaster and how it differs from the traditional, solid-body version of the Tele!

Each musician is going to learn their own style, and have their own preferences. It is impossible to tell you that the Thinline will be better for you than the solid-body Telecaster, but now you know what to look for, what to watch for, and how they compare!