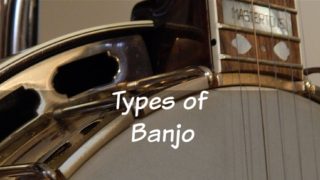 The Banjo is a title that is applied to quite a wide range of variations on the same instrument. More so, than most, if not any, other stringed instruments the banjo has been changed to fit different styles and musicians. There are many types of Banjos, but we will cover the archetypes here.

When buying your first banjo not only do you have to choose between Open Back or Resonator Banjos, but then you need to decide the number of strings you’d like to play. Then, if you look at some of the hybrid models you have even more of a selection!

By the end of this article, you’ll have a feel for the different types of banjos offered, what types of music each is commonly found in, and how to choose which type of Banjo is right for you!

The Different Types of Banjos

The type of Banjo you will be playing depends on a few factors. The two major differentiators is open back vs resonator banjo and the number of strings you’re playing. We’ll dive into both factors to look at how they effect your banjo playing!

The open-back versions, however, do not come with the resonator and are better suited for music that is supposed to be mellow and quieter. Open back banjos are lighter and cheaper than their resonator-equipped counterparts and are generally favored by followers of oldies and country music.

While the Resonator Banjo is more expensive, it is generally better for bluegrass and being played with a band due to it’s increased volume, sustain, and fuller sound.

Now that you know the basic difference between Resonators and Open Backed Banjos, it’s time to really complicate things. The second way to classify modern Banjos is the number of strings present.

Four-string banjos tend to be a lively instrument, and great for beginners due to their simplicity. Four string Banjos are normally classified into two subcategories, the plectrum, and the tenor.

A true advantage of the four string is their versatility, as they can be tuned like a fiddle or mandolin (EADG), like a ukulele (GCEA), or the first four strings of a guitar (EBGD).

Plectrum banjos are similar to 5-string banjos except the fact that they lack the drone string and are played using a guitar pick, which is how they came into their name. Plectrum banjos are a popular choice for Dixieland enthusiasts.

The tenor, on the other hand, is popular among traditional Irish musicians and have a shorter scale. These can be found in either 17 or 19 fret neck lengths.

You can also check out the video below, which gives a detailed rundown on the different types of 4-string Banjos.​

Modern 5-string banjos have recently been thrust into the mainstream music culture with the re-emergence of bluegrass music but it can also shine in many other genres. Although there is one more string to contend with, this can also be a great choice for beginners due to the wide range of teaching elements available at sites like BanjoCompass.

The five strings are arranged in the following fashion: fourth, third, second, first and fifth. The fifth string is also known as the thumb string and produces a drone sound, it is also known as the ‘odd’ string because it attaches near the halfway point on the neck. The open-G tuning (G-B-G-B-D) is the most common and usually good for beginners to start with.

Electric banjos have started to make appearances in bands that perform for large audiences, and are mostly being produced in either the 5-string or 6 string varieties currently.

6-strings were popular in the 19th century. Nowadays, a hybrid variation known as the guitar-tuned banjo, also called the banjitar is available. This is starting to pop up in mainstream music for guitar players that want a more distinctive sound.

For young musician, this acts as a great crossover instrument that retains the rustic charm of a banjo’s sound.

Honestly, the 12-string Banjo is a very rare instrument and is played exactly like a 12 string guitar is. The sound it produces is light and fun, unlike anything else you’ve heard.

Other hybrid variations of the modern banjo have also become popular in order to adapt the instrument to different genres and contexts. As we already mentioned, the 6 string Banjo is similar to a guitar, and in some cases even borrows the neck from them. In other variations, the profile of an electric guitar is added, while retaining the drumhead body of the banjo.

Another variation which has gained acceptance among modern musicians is the banjolele. A mix between the Banjo and the Ukulele, it is equipped with 4 strings, a shorter neck and a head of a smaller diameter. It resembles a small banjo, is easy to learn for beginners and is also easily portable. The music is well suited for quieter acoustic ensembles.

Banjo and Mandolins are also being mixed with quite a lot of fanfare, but both of these instruments still have much larger traditional followings than the Banjolin has developed so far!

How to Pick out your First Banjo

Just as a warrior picks out his weapon of choice with utmost care, the musician too should exercise caution while choosing his instrument. After all the acoustic quality, dynamics and design of the banjo have a telling influence on the sound that is ultimately produced. However, with the following tips, we believe, that preliminary screening of instruments may be performed.

1. The first step of testing a banjo is to test the string settings. Start by pressing down on each string throughout the length of the fingerboard. If the strings make contact easily with the frets without causing undue stress to your fingers, this is called the action of the Banjo. If you don’t like the force it takes to press down, then it might be time to move on to the next instrument.

2.  Next, strum the strings, first individually and then together. Listen to the quality of sound produced, there should be no rattling or buzzing. While strumming, let the sound linger for a bit so as to judge the quality of ‘ringing’ of the banjo.

3. Check whether a tone ring is present or not. The presence and type of tone ring will greatly affect the sound of your banjo.

4. Check whether the tuners can be operated smoothly and correctly. Geared peg tuners are more reliable the friction-peg types for holding the tune.

5. You may want to see how available lessons for the instrument you are thinking of choosing. Artistworks has a great 5 string banjo course, but we don’t know of ones tuned to the banjitar or four string banjos (although I’m sure they exist!)

What is a 5 String Banjo Called?

5 String Banjos are normally just called Banjos. This is the traditional and most common string configuration for the instrument so unless someone specifies something else, they are probably talking about a 5 string banjo!

What Type of Banjo is Best for Beginners?

If a musician doesn’t have any prior experience playing a stringed instrument, the 5 string banjo is probably the best for beginners. That being said, the four string banjo can be better for ukulele players, and the 6 string banjitar is the perfect instrument for someone switching from a guitar!

What is a 6 String Banjo Called?

The 6-string banjo is a hybrid between a guitar and banjo. Thus, it is often called a banjitar, guitjos, or ganjos. Banjitar is the most common, but calling it any of the following is technically correct!

The banjo is a very versatile musical instrument that can be rediscovered time and again in the context of different musical genres. It is one of those rare instruments that bring together sophisticated playing techniques with simple country charm.

Needless to say, it is important to understand the basic varieties of banjos available and the different playing techniques employed in order to become an informed player. We hope that with this article we have been able to provide you a nudge in the right direction.

If you’d like to learn more check out these pages from ZeppMusic and DeeringBanjos. ​