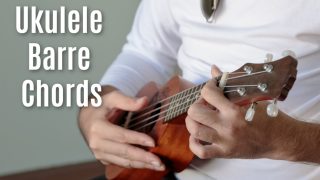 If you’ve been playing the ukulele, or other stringed instruments for any length of time you probably have realized that there are a lot of ways to play different chords. Ukulele Barre chords are just one of those ways.

A barre chord is played by pressing down on one or more strings across the neck of the ukulele. By doing this you essentially create a capo across the fret you are barring, changing the notes of each string.

Now, if you haven’t mastered the regular chords you may want to start there before tackling the barre chords.

Barre chords tend to be difficult to master on the ukulele, but not as hard as either the mandolin or the guitar. If they are so difficult to play, why even bother to learn them?

While they can be a pain to learn, once you master the barre chord you gain a lot of advantages as a ukulele player. The first is simply that you become a more well-rounded musician!

Barre chords allow you to play chords in multiple ways. For example, a standard “A” chord doesn’t look anything like the shape of the barre “A” chord. There are times when playing one variation or the other will be easier to move to and from the next chord.

You also get the benefit of a different tone when you play a barre chord. Even though you are playing the same note the tone will be slightly different depending on where on the neck it is played, so you can add some nice variation to your music that way.

Lastly, you can chuck your capo. Well, maybe you want to keep it handy, but you won’t need it as often! While capos have their advantages, they can also be difficult to work with. Barre chords help eliminate that problem!

How to Play Ukulele Barre Chords

There are two forms of barre chords for the uke. The first is the full barre, and the other is a partial barre. We will go through both and give an example of each so it’s easier to understand the difference.

The full barre is, as you might expect, where all four strings are held down across a single fret. For example, if you play a “C” chord, with your index finger barring the 2nd fret, you’re actually going to get a “D” Chord.  Likewise, move the bar down two more frets to the fourth and you’ll have an “E” chord.

With the full barre all four chords on a given fret will be held down, the partial barre only requires 2 or 3 to be held down, depending on the chord. These are much less common on a ukulele than an instrument like the guitar, but they still do exist.

We don’t generally recommend partial barres for the uke as they tend to be used to ‘cheat’ full chords and frankly just don’t sound as good.

For instance, you can play a Bb (B Flat) chord by barring only the bottom two strings, which might be slightly easier to play than the full barre version, but will sound slightly off to a trained ear.

6 Tips to Improve Your Barre Chords

Just like any other chord on the ukulele, playing barre chords will take practice. Many people will struggle to find the correct position for them and have difficulties moving to and from them from normal chord shapes.

If you’ve been practicing for a while, or simply want to get some tips before you try to play them, here are seven things that should make your ukulele barre chords a bit easier!

This actually should be part of your warmup routine in general, but it can be especially important for the difficult hand positions that barre chords often put you in. Remember, your hands and wrists are made up of hundreds of ligaments, muscles and joints and get stiff just like your back, knees and shoulders.

Here is a quick hand and wrist stretching routine for you to add to your warmup, don’t worry, it only takes 5-10 minutes!

Most regular chords don’t require your thumb to be in any particular position, not so with a barre chord. Because you are pressing down on multiple strings, you’re going to need a little more leverage.

To do this we like to put our thumb smack in the middle of the back of the neck. This should allow you to press evenly on the 4 strings and create a nice strong barre.

3.Press down at the Fret

This is fairly common advice, even when playing a normal chord. The closer you press to the fret the clearer the note tends to sound.

With a barre chord it is even more important, not only will pressing down right next to the fret make the note sound better, it makes the chord easier to play and it will increase the chances you won’t have random dead strings and the note will be clear.

4.Double Up on Your Index Finger

Barre chords for the ukulele and guitar are normally played with your index finger acting as the barre. If the chord shape allows you can lay your middle finger over the index, adding a little extra pressure.

You can only do this with chords that only require 2 additional frets to be held down though, and some notes are hard to reach in this shape, so you’ll have to experiment to find what is best for you!

5.Use Your Middle Finger

We just got done saying the index finger is normally the finger used for barres, so now we are going to tell you to break that rule!

Pick out individual notes as you are warming up or learning to play. This will help you identify which, if any, notes are not ringing out. Once you know which string isn’t being held down all the way you can adjust your hand.

It’s common that you’ll have to make multiple adjustments to get the right shape, and this may happen every time you try to play the chord for a while. Each time you get to the correct position and play the note a few times you’re teaching your hand where it needs to be though, be patient!

Not only does your fretting hand need to be nimble (see our first tip), but playing ukulele for long periods of time, or holding barre chords, can require a very specific type of strength.

There are ton of books on this sort of thing, but our Justin over at YouTube has a great program designed for guitar players that works great for uke strummers too!

Just like many things with the ukulele, barre chords will take some time and practice to master. Keep practicing and working on the tips we’ve provided here and you’ll get it!