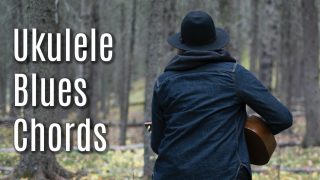 Ukuleles are really great instruments to have and compared to many other instruments they are incredibly easy to learn. Once you master the basics you may want to learn different styles of music, and we always recommend the blues. Once you learn the basic ukulele blues chords you’ll be able to play a number of popular hits, too!

Even better, many of the most common ukulele blues chords will be sprinkled into songs of different genres, so you’ll quickly be playing the both the blues and have extra chords in your quiver!

Most commonly, the way to transform ordinary chords into blues chords is to add a 7 note. The 7th’s give the chord a slightly different sound that has been widely used and associated with the blues genre.

For example, a normal C chord is made by simply holding down the A string at the third fret. The g, C, and E strings are simply strummed.

To make a blues C chord, or the C7 chord, you would hold down the first fret of the A string, and play the other 3 chords in the open position.

While not exclusive to blues music, just by turning a regular chord progression into a set of 7th chords, you can give a song a bluesy feel and soulful sound that will distinguish it from similar songs.

To see a song from the key of A turned into a blues chord progression, check out the video from Ukulele Underground we have linked to below:

Many blues songs and early classic rock songs use what is known as the 12 bar blues. To learn it, we will use the key of A they teach in the video above. So first thing is first, you’ll need to start by knowing three chords, the A7 chord, the D7 chord and the E7 chord.

The blues is usually played in a strumming pattern of down, down, up down up. A sample 12 bar blues progression in the key of A would go as follows: A7 is played 4 times, D7 played 2 times, and back to A7 2 times, then to E7 for two times and back to A7 two times.

It’s easy to see that 12 bar blues forms and structures are built around 12 bars in total. Now, each bar is often broken down into quarter notes where the strumming pattern we mentioned above.

To play a bar of A7, you would strum down, down, up down, up. Repeat that four times for the bars of A7, move on to playing that pattern twice on D7, and so forth.

Simply by learning many combinations of the 12 bar format, you can learn many songs. Johnny B. Goode by Chuck Berry, Tutti Frutti by Little Richard, The Thill is gone by BB King, I Feel Good by James Brown, Rock around the Clock by Bill Hailey, Rave On by Buddy Holly, and Folsom Prison Blues by Johnny Cash are all based on 12 bar structure.

By learning 12 bar structure, you can visually deconstruct the pattern of many songs, and that demystifies them as you are learning to play the Ukulele. Pretty soon you’ll be picking up on this pattern in songs you don’t even know!

12 Bar Blues on Ukulele in C

The standard variation of the 12 bar blues scale in C follows the sequence has the ukulele blues chords of C7, F, and G7 normally Incorporated. A good progression to start with is to play the C7 chord for 4 bars, 2 bars of the F chord, 2 bars of the C7 chord, one bar of the G7, a bar of F, and 2 bars of C7.

We already mentioned a few famous songs using this progression, including Tutti Fruitti by Little Richard, Folsom Prison Blues by Johnny Cash, and some we didn’t mention like Rock N Roll by Led Zepplin, Tush by ZZ Top, Houndog by Elvis Presley and Give me One Reason by Tracy Chapman.

There are a number of tricks that you can gradually learn to make the 12 bar blues more sophisticated.

These tricks include things like shuffles, turnarounds, and trickle downs. If you are a beginner to the ukulele you should skip this section for now, but if this article has been mostly review, and you have your 7th chords mastered these can be fun tricks to spice up your playing style and sound.

By learning all these blues variations you can accelerate your playing from total amateur to crowd-pleaser. The Ukelele is a terrific instrument and by learning all the ukulele blues chords you add a great range of chords and sounds to your arsenal.

While the 12 bar progression is not exclusive to blues by any stretch of the imagination, it is a staple of the genre and will open up both your musical knowledge and song section by knowing and understanding it!