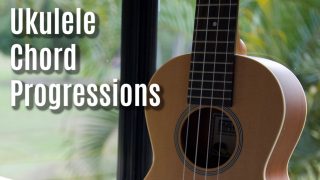 Most scientists argue that music is as old as human beings. In fact, some think that music helped in establishing basic language. This means that humans have been playing music with chords for a LONG time, and it’s likely that shortly after the ukulele was invented people started learning the best ukulele chord progressions.

The theory behind music is very interesting, you may want to know how it was created out of codes and patterns when you are playing a ukulele. In this article you will learn some of the basic ukulele chord progressions, which is a great piece of music theory to know and understand.

Ukulele chord progression is a musical scale that uses a different set of systems known as equal temperament. Unlike other tuning systems, it has notes with the same ratio and with the same frequency intervals adjacent to each other. After all, it originated from European musical tradition.

Once you know your chords you will realize they tend to move in predictable patterns. As you get to know them better you’ll start to hear them in songs while you are lessening. To help talk about these progressions musicians have developed scales based on the first note, as well as a numerical system.

Learning these progressions can increase your overall music knowledge and make you a well rounded musician, and can easily be put into your normal practice routine.

The Key of a Song

We will start by sorting the ukulele chord progressions by key, Keys are vital to writing music and developing songs as they affect tone and the music mood. So, what is the key of a song?

To start with, the first common key is C. This key does not use flats and sharps of the ukulele, so it is very simple and straight forward. In most music classes this is the first key you will be introduced to. The other keys used in ukulele include C major, D minor, G major, A minor, E minor, F major, and B diminished.

Most information published online uses the chord format to teach and show people how to play songs. Just knowing the shape of a C, D and G chord will allow you to play a LOT of music. That being said, you may run across someone using the number system to write music, so we’ll dive into that next.

What is the musical number system? Instead of using chords to describe their progressions, musicians allocate chord numbers rather than letters.

In any given key, there is a numerical scale. For instance, in C major key, C is allocated I, Dm allocated ii, Em allocated iii, F assigned iv, and so on. In the number system, the upper case roman numerals represent the major chords while the lower case denotes the minor.

Let’s assume that you are using a C major scale. Your scale will look like (C D E F G A B); therefore, you will just assign numbers to the intervals. For instance, G is the I, Am is the ii, and so on.

Do you want to produce excellent music? There are proven, well established ukulele chord progressions that will make the process easier if you chose to follow them. It is nothing hard but a list of Roman numerals assigned to the keys.

As seen, the major Roman numeral chords are capitalized while the diminished chord is in lowercase. Each chord number corresponds to a numeral. Well, the common chord progressions for the ukulele are three. They include I, IV, and V corresponding to C, F, and G.

You will notice that almost all songs use the above three-chord progressions after you learn how to play the ukulele. They are supposed to be four, but two of them sound similar. These chords are played together to add melody to the song. If you are a fan of most genres of popular American music, you will find the three-chord progression everywhere.

If you are interested in composing a song, This three-chord progression is the perfect starting point. You will have tons of examples to help you along the way, and it is a proven method to make great sounding music.

There you have it! Ukulele chord progressions 101. Once you learn your basic chords and scales then this is a great next step, especially if you want to write music. So grab your favorite Ukulele and get to playing!