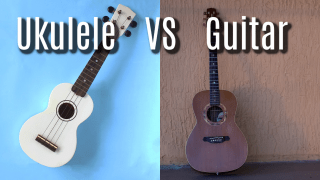 There are many musical instruments that are similar to each other. The Uke and the Guitar are two of those instruments. Once you know what to look for, you’ll never have to ask about the differences between the ukulele vs guitar again!

In this article we’ll talk about the key differences between these two stringed instruments, then answer some common questions including, “Is it easier to play ukulele or guitar?”

Ukulele vs Guitar: The Differences

The differences between these two instruments are fairly significant, and it won’t take you long to tell them apart after reading this article!

The Number of strings

Possibly the biggest difference between these two instruments is the number of strings. The guitar has six strings, whereas the ukulele only has four. This makes it so just by looking at the two instruments you can tell which is which.

Two strings doesn’t seem like much, but it changes the sound, tone and how each of these instruments is played to a drastic degree!

Now, there are exceptions, for instance, bass guitars often only have four strings. So let’s look at some of the other differences.

The physical size of the instrument itself is fairly different between the ukulele and the guitar. The ukulele is quite small and compact, while the guitar is a lot larger. Just by looking at them you can tell which one is which!

In fact, a guitar is commonly twice the size of the ukulele. Especially when we are talking about a soprano ukulele, the smallest standard size.

Ukulele has four common sizes. The soprano, tenor, concert and baritone. Guitars have much less distinction in their sizing. You will find travel guitars that are 3/4 of the size, and some guitars will have a deeper body, sometimes a longer neck. Overall, most of them fit into the standard size though.

The tuning of strings is another big difference between these instruments. The ukulele’s strings are tuned in GCEA order (from bottom to top: C, E, A and then finally G). The guitar on the other hand adds two bass strings, the E and A string. This means that in standard tuning, guitar strings are tuned as follows: EADGBE.

Generally speaking, a guitar is more difficult to tune than an uke due to its bigger size sound and the extra two strings. There are plenty of ways to tune the guitar, so as long as you know the notes of the open strings you should be fine!

The next item, although less noticeable than the size or the number of the strings, really impacts the sound difference between the ukulele vs guitar. Guitar strings are generally made from nylon or metal. Ukulele strings are almost always nylon. Due to the difference in material, the density of the strings and so on, each string tends to have a different sound when played.

The metal-strung guitar has a much brighter and harsher sound than the nylon strung ukulele, while the nylon in turn sounds warmer and smoother than steel or nickel.

Thanks in large part to the material, guitar strings also carry significantly more tension than the nylon ukulele strings. As such, the stringed instruments are played slightly differently.

This difference in tension also leads to a difference in playing style. Many guitarists tend to go for a percussive style of strumming, hard hitting the strings with a lot of force and little finesse.

Ukes are strummed in a much softer fashion, and the up-strum is often the focal point of the strumming pattern rather than the down-strum, which is normal on guitar.

To accommodate the larger body the guitar has a neck that is proportionally larger than that of a ukulele. A soprano ukulele often only has 12 frets, where the standard guitar has 21 or 22.

The frets on a guitar also tend to be larger in order to accommodate for the increased string tension and length of the neck. This difference in fret size is one of the main reasons why a guitar is more challenging to learn for kids than a ukulele, smaller hands don’t have to stretch as much with smaller frets.

While not a physical or sound difference, it is worth noting. A good beginner ukulele can be found for $50-$100. A guitar of the same quality will probably be closer to $150.

The Baritone is the largest of the normal ukulele size, and is thus much closer to a guitar. Unlike the smaller size ukuleles, the baritone is often tuned DGBE, which if you’ll notice is the same notes as the four thinnest strings on the guitar.

Many guitar players find it easier to transition to a baritone ukulele than to a smaller size. Not only is the instrument closer to the size they are used to, but the tuning is more familiar as well.

Is it Easier to Play Ukulele or Guitar?

It is hard to give a straightforward answer to “is it easier to play ukulele or guitar”. It partially depends on your age, size and body type. The ukulele has the advantage of having fewer strings, which means that you don’t have as many notes, frets and chord shapes to memorize.

The guitar, depending on the size, is going to be more difficult for younger children because their hands are smaller and they need more room for their fingers when playing the chords. I’ve seen many larger individuals struggle with the soprano ukulele just simply being too small to finger easily.

If you’re thinking about learning one or both of these instruments, I would recommend trying out both in person. Find the one that sounds right to you, that you seem to enjoy playing more, and go with that one!

Is it Better to Learn Guitar or Ukulele First?

For many people this is preference. If you love the sound of acoustic guitar, that may be the instrument you want to start with. For others, the uke is more familiar and thus the easier instrument to learn. The decision is up to you – there are no wrong or right answers!

If you are worried about how long it’s going to take you to learn, I would suggest starting with the ukulele because it’s so much smaller, cheaper, and usually people can pick up the basics quicker on four strings than six!

For me, I found that the ukulele was a better fit for being played around the house or in the yard. The guitar fun to take places, and fits in better when I’m playing with other musicians. Both are fun and have their time and place!

I definitely recommend trying out both instruments before making your final decision about which one to learn first!