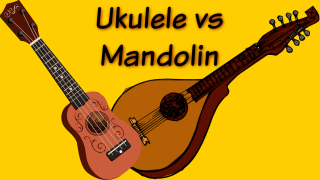 From appearances, alone many people assume that the ukulele and the mandolin are quite similar as they are both small stringed instruments. In many ways that are as far as the similarities go! The differences in ukulele vs. mandolin are actually quite numerous.

In this article, we’ll discuss the differences between the ukulele and mandolin as well as answer a few common questions we get when comparing the two!

Differences between the Ukulele and Mandolin

As we already hinted at, other than their approximate size these two instruments actually don’t have much in common.

The differences between the Ukulele vs. Mandolin include the size and shape of the body, the places of origin, tuning, instrument family, and even the number of strings. Both instruments have closer stringed instrument relatives than each other.

Let’s look at each of these factors in more detail.

The Ukulele generally comes in four sizes, the soprano, which is actually the smallest; next is the Concert or Standard Ukulele, Tenor, and then finally the Baritone. The smaller the size the higher pitch a ukulele tends to be, with concerts and sopranos living up to the true ukulele pitch.

For comparison, the Mandolin comes in three main variations, which differ in body shape rather than size.

The Neopolitan Mandolin is a bowl-backed instrument that is possibly the oldest and original style of mandolin. Due to the extra area of the sound chamber, these instruments produce a deeper sound than other options and will often be found being played by classical musicians.

The A-Style is a tear-drop-shaped instrument is probably the most popular shape, partially due to the fact it’s often the cheapest. The sound is very similar to the F-style Mandolin, but A-Styles are seen far more often in Celtic, Irish, and folk music.

Lastly, the F-Style is widely considered the bluegrass mandolin. The main difference between the A-style and F-style is cosmetic, with the F-style adding points, a scroll, and different headstock to the tear-shaped body of an A-style. Bluegrass musicians tend to this style due to more treble attack and percussive “chop” than the other body shapes.

The standard tuning for these two instruments is different as well. Mandolins normally are tuned GDAE, whereas a ukulele is tuned GCEA. Even the common baritone ukulele is tuned DGBE rather than the Mandolin tuning.

The tuning on the Mandolin is actually the same as the fiddle, and just like the fiddle, a properly tuned Mandolin will have each string be a Perfect Fifth interval.

Ukuleles also often employ reentrant tuning, meaning the C string is a higher pitch than that of the G. This is different than Mandolin tuning because on a mandolin the pitch of the strings goes in order.

Mandolins have 8 strings, 4 main and 4 minor, similar to how a 12 string guitar duplicates the 6 notes of a 6 string guitar. The Ukulele simply has four strings total.

Mandolins also normally use metal strings that are strung at higher tensions than the nylon strings often found on ukuleles. The softer feel of the nylon strings is one of the reasons many beginners prefer the ukulele vs mandolin.

As with many stringed instruments, both the Mandolin and Ukulele fit well into many types of music. The mandolin, due to its metal strings, is generally louder and can compete with the sound of a bluegrass band easier than and uke will though.

Along with Bluegrass, mandolins can commonly be found in Irish, Celtic, Classical European, and American folk music.

While the Ukulele has almost invented its own style of music, the tropical, light sound we associate with islands in the Pacific and Caribbean, musicians like Eddie Vedder and Vance Joy have brought it to the mainstream with pop hits in the last decade.

The Ukulele belongs to the guitar family of instruments and is considered a plucked lute. The mandolin on the other hand belongs to the soprano section of the lute family.

The Mandolin traces its roots to Italy and Germany as early as the 18th century. Like many stringed instruments from Europe, an earlier version of this instrument goes back even further and Mandolin like instruments evolved around the 14th century.

The Ukulele in its current form originated in Hawaii in the 20th century after Portuguese immigrants brought it to the Hawaiian islands in the early 19th century. Not until travel to mainland America became more common did the instrument gain popularity outside of Hawaii.

Mandolin vs Ukulele: Which is Easier to Learn?

I consider the Ukulele a lot easier to play than the mandolin, especially for someone who hasn’t played a stringed instrument before. The nylon strings are more forgiving, the music styles are generally slower and more relaxed, and the tuning is more intuitive.

That being said, the Mandolin isn’t impossible to learn as your first instrument. You just need to go into it knowing it might take a little longer and require a bit more practice!

Which is Cheaper, Ukulele or Mandolin?

There really isn’t a comparison here, Mandolins are significantly more expensive than ukuleles for similar quality instruments. While this isn’t the most important factor for which instrument you should choose, it can come into play.

A good ukulele can easily be found starting around $75 -$100, the same quality Mandolin will easily cost you $300 or more. For children, I often recommend the Ukulele over the fiddle, banjo, or guitar due to its cost. A kid who shows interest in music can quickly switch to a more expensive instrument after they show they will play and practice with a uke!

Final Thoughts on Ukulele vs Mandolin

If you’re new to stringed instruments and trying to decide what’s right for you, I recommend the Ukulele. The sound is light and happy, and it’s simple enough to learn on without struggling with technique or difficult tunings.

For someone more experienced looking for a stringed instrument that can hold its own in a bluegrass band, the Mandolin is a perfect choice. With 8 strings at higher tensions mandolins can keep up with faster music styles than ukuleles can manage.

Either way, have fun playing… that is really the most important thing!