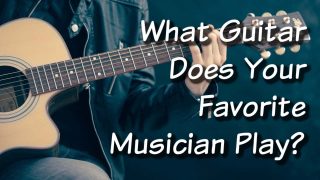 For many of us, picking up an instrument is inspired by watching a musician we admire or whose music resonant with us to our very core. For me, it was John Frusciante of Red Hot Chilli Peppers. For you, it might be Slash, Ed Sheeren, or Taylor Swift.

It’s also fun to think about what guitar does your favorite musician play as you practice and dream about stardom of your own one day.

While there is no way for us to cover the instruments that all of our favorite guitarists play, we’ve assembled a list of some of the most popular musicians of today. These are people we’ve been asked about multiple times and have huge followings.

These are also mostly current musicians. If you are looking for some of the most famous guitars in history, we have an article for that too!

What Guitar Does Ed Sheeran Use?

Ed Sheeran’s favorite guitar has long been the Martin LX1 Series acoustic guitar. In fact, the guitar got so much attention thanks to Sheeran’s use that Martin collaborated with the artist for a Signature Edition lineup that included the “Divide’s” album logo.

Interestingly, Sheeran has always preferred the 3/4s size guitar to a full-size dreadnought or jumbo guitar. The sound from a smaller guitar is more focused and matches both the style and sound of Ed’s music.

While Sheeran doesn’t play the electric guitar often, he has been spotted on stage playing both a Fender Stratocaster and a Paul Reed Smith Hollowbody II.

What Guitar Does John Mayer Play?

John Mayer currently plays a Martin OMJM signature acoustic guitar, which is an adaptation from his first signature line, the OM-28. Unlike many pro models, there is no cutaway at the bottom of this guitar which would change the resonance of the spruce top John prefers.

When going electric Mayer has played a fairly wide range of Fender Stratocasters over the years. Currently, he is with PRS guitars, where he plays the PRS Silver Sky, which is very similar to the Stratocaster body and setup, with a headstock that screams PRS.

What Guitar does Dave Grohl Play?

While you might think of Grohl as the other guy in Nirvana (their drummer), or even the lead man from Foo Fighters, he has been influential in the last 20 years of rock music and quite a good guitar player.

Grohl has played a number of different guitars over the years, but most of them fit the size and shape of the Gibson ES-335. His most common guitars are a 1967 Gibson Trini Lopez Signature ES-335 and a black Gibson DG-335. Since 2007 he’s been playing his signature DG-335 in either a light blue or an ebony black model.

What Guitar Does Slash Play?

Slash has almost always played a Les Paul guitar, both for performances and in the studio. One of the first Les Pauls he played was custom-made by luthier Kris Derrig with Seymour Duncan Alnico II Pro pickups.

In the years following this guitar Gibson has teamed up with Slash to make an entire collection of Les Pauls with his name on them. While there are some variations between the models, all of them carry the Les Paul feel and sound that Slash fell in love with recording his first album with Guns ‘n Roses.

What Guitar Does Angus Young Play?

AC/DC’s lead guitarist has been playing a Gibson SG and was a huge fan of the original 1968 model which brought the world many of the band’s hits, including “Thunderstruck”. As with many other famous guitarists, Young has gone on to work with Gibson to produce a custom SG.

The Angus Young SG offers the lightning bolt pearl inlays that have become something of a calling card for Young. In addition to that, the model features a custom bridge pickup paired with a vintage neck pickup.

What Guitar does Jimmy Page Play?

Jimmy Page, aka Led Zeppelin’s lead guitarist, has often been quoted as saying his “Number 1” guitar was his 1959 Gibson Les Paul. That didn’t stop him from playing a wide range of instruments on stage though, including a Danelectro 3021, several Fender Telecasters, and a Gibson Les Paul Deluxe.

Possibly Page’s most famous guitar is the double-neck Gibson EDS-1275 that was used to play and record “Stairway To Heaven.”

What Guitar does Billy Strings Play?

Unlike some of the other rock legends on this list, Billy Strings is a bluegrass legend with a great following, yet someone not as well known in mainstream culture. Take nothing away from his music though as I dare you to try to pick half as fast as he does!

Billy Strings plays his signature Preston Thompson Dreadnought Acoustic Guitar. This Oregon-based guitar company specializes in higher-end, dreadnought-sized guitars that have long been the choice of many top bluegrass musicians. After playing the Mahogany model for years, Strings recently switched to the Indian Rosewood model from Thompson.

What Guitar Does Your Favorite Musician Play? – Summary

When researching these amazing guitarists and the instruments they played, one thing stood out to me. They all play different instruments, and yet, very few break from their signature sound.

It’s important that you find the instrument that inspires you, but it also needs to fit your personality, which unique approach to music, and your hands. They’re what get in between you and the strings so having comfort is a must!