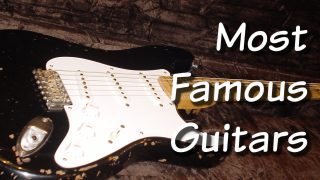 Answering the question “What is the Most Famous Guitar?” in a straightforward way might get me in a little hot water with more than a few musicians. Just like debates about the best guitarist, many people will have different opinions when it comes to famous guitars.

That being said, there are instruments that have gone down in folklore for the songs that they produced and the guitarists who played them. Instruments that are responsible for some of the most iconic songs ever written have created a bit of controversy about which is the most famous.

In this article, we’ll dive into 12 legendary guitars and the musicians who played them!

What is the Most Famous Guitar?

I’m still not going to put my hat in the ring and say any one of the following is “THE” absolute, hands down, most famous guitar ever. Instead, I’m going to say that all guitars on this list are notable and amazing in their own right and deserve at least a mention!

Prince actually had two guitars that could have been added to this list. The cloud was featured in the “Purple Rain” video and is a custom-built guitar that most people can picture thanks to the widespread success of that video.

I almost added Prince’s symbol guitar to this list, but the fact I had to look up a picture of it to remember what it looked like made me think it was better left off in favor of the iconic “Cloud”.

In the 60’s left-handed guitars weren’t nearly as easy to find in the Amazon and Guitar Center world we live in today. Hendrix was left-handed and played a Fender Stratocaster upside down! If you look at the pictures it’s clear to see the pic guard and smaller “horn” facing up. In addition, the tuning pegs, normally face up, but not in most Hendrix pictures!

With Hendrix being the guitarist he was, most people believed he could play the guitar right-handed. He definitely preferred restringing his guitars to a left-handed setup and playing them that way though, especially early in his career.

“Old Black” is a vintage Gibson Les Paul Goldtop from the 50’s that has been upgraded and modified multiple times over the years. While Young plays a lot of music on acoustic when he’s playing electric “Old Black” is probably in use!

Up until the mid-80s when “Blackie” was retired this was Clapton’s go-to guitar and you can see it on performances of many of his most famous tracks including Layla, All Along the Watchtower, and Tears in Heaven.

This guitar was sold at an auction in 2004 supporting Clapton’s rehab center, “Crossroads“. It almost brought in 1 million at that time!

While many might not know Brian May by name, you’ve undoubtedly heard his music. The lead guitarist for Queen, Brian played this handmade guitar throughout his time with the legendary rock band.

Amazingly this was a homemade instrument from the start, being built from oak from a table and a fireplace mantel in the family home. It has been restored a few times over the year, but this instrument has yet to be put on the shelf and retired.

This Martin N-20 nylon-string guitar was named after a horse and is about as well worn of an instrument as we can think of! The guitar never had a pickguard and over the years developed an iconic hole in the body.

Nelson played other guitars, but Trigger was always his favorite. When asked about retirement at one point he was quoted as saying “When Trigger goes, I’ll Quit.”

There was no way we could make this list and leave off the guitar that brought “Stairway to Heaven” to us. Led Zeppelin’s lead guitarist Jimmy Page played a double-neck Gibson for that recording and many live performances.

The 12-string top and 6-string bottom are still to this day how many double-neck guitars are designed thanks to this instrument and the music it created!

The Jaydee SG was created specifically to suit the constant thrashing that Angus Young put his instruments through as guitarist for AC/DC. The SG guitar was later brought to Gibson and mass-produced, but “Jaydee” will always be the original.

When the Beatles hit the scene the music world went electric, and the Rickenbacker 12-string was a big part of it. Harrison played a Gretsch for much of his early touring days, but once the Rickenbacker was given to him he played it almost exclusively after that.

While King played many Gibson semi-hollow body guitars over his long and celebrated career, they all were named “Lucille”.

When King was young a woman named Lucille sparked a fire at a club where he was playing at. King had to rush back into the fire to save his Gibson, and thereafter his guitars always shared the name of that girl.

Kiss was larger than life. They had big hair, big costumes, made big sounds, and had big, original instruments. Gene Simmons Bass guitar was designed with a serrated ax head below the body of the guitar and kept the cosmetic look for every performance the band played, even though he switch bass guitars several times.

When Cobain wasn’t smashing guitars, he was combining them, changing parts, and modifying them to his liking. Always a Fender fan, two of his favorite models were the Jaguar and the Mustang.

The custom-built “Jag-Stang” was played on the 1994 “In Utero” tour with Cobain and later was given to Peter Buck from R.E.M and featured in their video for “What’s The Frequency, Kenneth”.

12 Of The Most Famous Guitars – Summary

The music world is full of amazing musicians and legendary instruments, so answering the question of what is the most famous guitar is no easy feat! With this list, I tried to touch on a few amazing instruments that graced a broad range of musical genres and tastes.

I’m sure there will be plenty of instruments I left off here and maybe some I didn’t know about to begin with, but it’s pretty hard to deny the impact that these 12 made on the world of music. What do you think? Any glaring omissions or hidden gems? Let us know in the comments below!